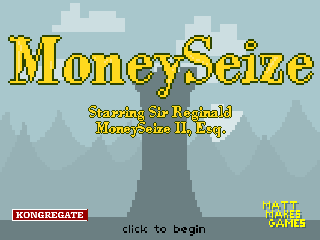 MoneySeize is a Platform Game in Adobe Flash released in 2009. The playable character is a gentleman named Sir Reginald MoneySeize II, Esq., who has to earn 1000 coins scattered over 40 levels to build a tower. However, obstacles are placed everywhere, and some coins are held by enemies and fickle birds, so he'll need to get through each course skillfully.