An island east of Madagascar and southwest of Mauritius in the Indian Ocean, Réunion (French: La Réunion) is an overseas region of France, an outermost region of the European Union and the most prosperous island in the Indian Ocean, having the highest GDP per capita in the region. In addition to the capital and largest city of the territory, Saint-Denis, this territory also contains the capital and largest city of the French Southern and Antarctic Lands, Saint-Pierre. With a population of 850,000 on just over 2,500 square kilometers (970 square miles), Réunion is one of the most densely-populated places in the world (it's actually more densely populated than the notoriously crowded Japan). In practical terms it's even denser: the interior of the island is largely mountainous rainforest not conducive to development, so nearly all the population lives in a "ring" along the coast.
Advertisement:

Originally claimed by the French in 1642, the island was colonized in 1665, when the French East India Company sent the first settlers. Africans, Chinese and Indians were imported as workers, contributed to ethnic diversity in the population, and most of the non-Europeans were enslaved from 1690 until the territory abolished slavery on the 20th of December, 1848. Afterwards, many of the foreign workers came as indentured workers. The Vichy regime took control of the island in World War II, until the Free French liberated the island with the destroyer Léopard on the 30th of November, 1942.

The island is known for the Children of Creuse controversy in the late 20th century, with 1,630 children from Réunion being relocated to rural areas of metropolitan France, particularly to Creuse, ostensibly for education and work opportunities, and many of these children were abused or disadvantaged by the families with whom they were placed. This was revealed in 2002 when one of them, Jean-Jacques Martial, filed suit against the French state for kidnapping and deportation of a minor.

Advertisement:
The best known animal native to Réunion island (as well as nearby Mauritius and Rodrigues) is the extinct dodo bird. The Réunionese flag 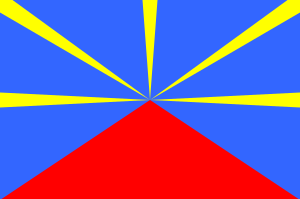 Let us go, children of the motherland,
The day of glory has come!
Advertisement:
Against us, the tyranny's
bloody flag has been raised.
Bloody flag has been raised.
Can you hear in the countryside,
These ferocious soldiers bellowing?
They come all the way into your arms
To cut your sons and wives' throats!
To arms, citizens!
Form your batallions!
Let us march, let us march,
And let an impure blood flow into our furrows!
Government Miscellaneous