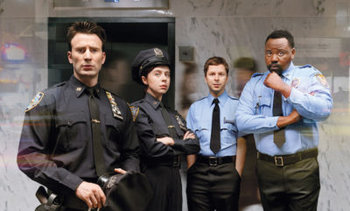 Lobby Hero is a play written by Kenneth Lonergan. It is set in the lobby of a Middle-class apartment complex in Manhattan, and follows Jeff, a twentysomething security guard, his boss William, and two police officers for whom the building is on their normal route, veteran Bill and rookie Dawn (who Jeff has a crush on). As the story progresses the secrets and problems facing the characters gradually become exposed, and everybody's image of the other characters shifts.

The play premiered off-Broadway in 2001 and was later given an acclaimed Broadway production in 2018, receiving Tony nominations for Michael Cera as Jeff and Brian Tyree Henry as William, and also starred Chris Evans as Bill and Bel Powley as Dawn.

Tropes Related to Lobby Hero include: