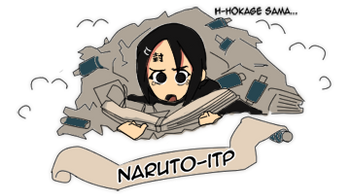 Art by Kasanip
"That's how you become powerful...but not strong. [He] didn't learn that and neither do you. You take the strength of others then use it to exhaustion. I...this village...the shinobi in it. We borrow the strength of our friends and family, and we make it our own!"
Motogin Sen, 3rd Hokage of Konohagakure
"Shame on you old man…but your ideal is just as flawed. It only works if they're afraid of something. People don’t want to work together, it’s their nature to want to stand alone, and we’re just like that. Your pathetic little speech about friendship and companionship…it’s all a lie you tell yourself so you can feel better when all your friends are actually dead and gone.”
Hazuma Kyo, Amekage of Amegakure, leader of Shoku

. It began as a "sister game" of sorts when certain Bleach In the Playground Freeform Play By Post (now Bleach ITP Classic) players decided to make a Naruto version of the freeform game they were already in. Originally, the game was set in the Village Hidden in the Leaves, but a growing player base and a desire to expand the setting has caused the game to look beyond the borders of Konoha. Although the game is set in the world of Naruto, there are differences between the game's setting and the setting of the original Manga, such as the lack of canon characters (Naruto himself, for example, does not exist in the game anywhere), different histories, and adjusted geopolitical borders and natures of countries.

The game itself is divided into multiple threads as necessary: a Primary thread and Episode threads. The Primary thread has always been set in Konohagakure itself, and almost every player has at least one character that hangs out in the Hidden Leaf Village. The Episode threads, meanwhile, have taken place in a variety of locations, from a customized version of the Hidden Rain Village to the original Land of Cedars, and tend to have a more limited number of players.

At the moment, Naruto ITP has an Out of Character thread

for discussing the game, characters, and general silliness; a Character Registry thread

for keeping track of all the myriad characters; a primary Role Playing thread

where most of the game goes on; and its own Wiki

Please add tropes pertaining to a specific character in the character sheet page. (Under Construction)

open/close all folders
The Story So Far:

The story opens on Konoha with various ninja going about their day to day business and the Hokage assigning new genin teams to jounin and, in one case, to a chuunin. These teams met for the very first time and, in some cases, went through initiation ceremonies with their instructors to see if they were truly worthy of being shinobi. Meanwhile, a Konoha missing-nin, Nobu Goro, sneaked into the village to reclaim important lab specimens for later study before a genin named Takeshi and a chuunin went to investigate the lab and were captured. About this same time, the Land of Rain annexed the neighboring country of the Land of Rivers by means of the machinations of one Hazuma Kyo.]]

Back at Konoha, the two prisoners escaped and retrieved help to ferret out the missing-nin only to have the lab collapsed around them. The missing-nin escaped, not without retribution from a chuunin team returning from a mission. Another unknown missing-nin, Kyo in disguise, staged a brutal attack against the Land of Grass before disappearing back into the Land of Rains at about the same time an 'Amekage' was named. Soon there after, the Seven Swordsmen of the Mist were contracted to deal with a dangerous missing-nin by name of Yoshi and after a hard-fought battle were able to claim their prize. In the Land of Grass, Kyo made overtures to the elder of the country for alliance before the Sandaime Hokage arrived to stymie his efforts. Upon his return to Konoha, the announcement was made about the beginning of the Chuunin Exams with various genin teams stepping up to try and become chuunin.]]

Several foreign ninja, some affiliated with villages but some not, then began to filter into the village for the exams for their own purposes, even as the villainous Shoku began to craft their own designs against Konohagakure. Among these actions were missing-nin being hired, tunnels dug underneath the protective barrier around the village, and other little actions such as planting infiltrators. As the Exams began, new conspiracies were revealed as well, especially amongst a clan of summoners who had sent one of their daughters to learn more about the shinobi world. As the first exams ended and the second began, dire news arrived about the assassination of the Sandaime Raikage and a coup within Kumogakure by a warlike faction. But before the Sandaime Hokage could respond, Hazuma Kyo commenced his assault on Konoha itself...

Meta Tropes: Tropes pertaining to events and people outside but still related to the game

General Tropes: Tropes pertaining to events and people within the game itself