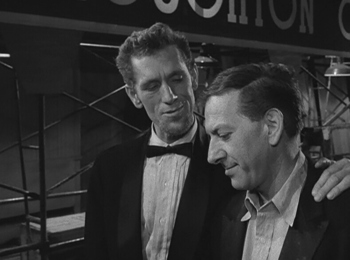 Rod Serling: Joey Crown, musician with an odd, intense face, whose life is a quest for impossible things like flowers in concrete or like trying to pluck a note of music out of the air and put it under glass to treasure...Joey Crown, musician with an odd, intense face, who, in a moment, will try to leave the Earth and discover the middle ground - the place we call the Twilight Zone.
Advertisement:

After he commits suicide, a trumpet player named Joey Crown (Jack Klugman) finds himself in a world where everything is moving, but no one notices him except for another musician.

Rod Serling: Joey Crown, who makes music, and who discovered something about life; that it can be rich and rewarding and full of beauty, just like the music he played, if a person would only pause to look and to listen. Joey Crown, who got his clue...in the Twilight Zone.
Advertisement:

A Passage For Tropes: