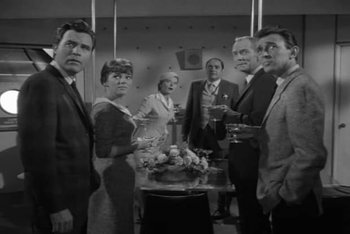 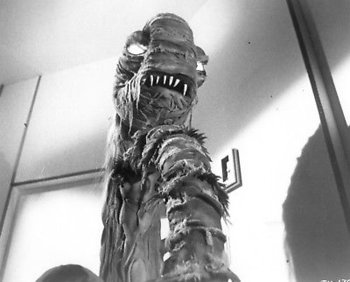 "...who still believe in monsters!"
The Control Voice: The great unknown: Limitless heavens crowded with sparking mysteries, challenging Man's curiosity. But the heavens are not oceans. Man cannot push a boat into its currents and set sail for the next horizon. The heavens are a mystery only science can solve, as it penetrates the unknown.

Six people participate in a simulated voyage to planet Antheon, while an entity watches them.

The Control Voice: Panic button pressed. Passengers returned. One side always in the sunlight, the other always in darkness; the known and the unknown. Frightening to each other only when they are both unknown... and misunderstood.

"You are tropers who still believe in monsters!"