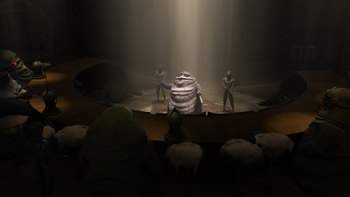 A Plot against Jabba

After her successful mission on Mandalore, Ahsoka Tano is assigned by the Jedi Council and her master to take a break from the action, which is a decision she accepts grudgingly. But in a short order, Ahsoka begins to have disturbing dreams of the bounty hunter Aurra Sing, who threatens to come after someone close to her. The visions get more and more troubling, but Ahsoka is gradually able to discern the target: Senator Padmé Amidala. Padmé is preparing to attend a conference hosted by Senator Bail Organa on Alderaan, which is to address the increasing humanitarian problem of the war refugees. Ahsoka gets permission to join the entourage, but her visions are getting so intense that Ahsoka gets close to paranoia and begins to feel unsure of her ability to cope with the stress. Padmé tries to assure her that she had felt the same sense of insecurity when she was Queen of her homeplanet Naboo. This encouragement which eases Ahsoka a little.
Advertisement:

As the conference begins and Padmé makes her speech, Ahsoka's fears come true as Aurra Sing has indeed smuggled herself into the conference building and is preparing to kill Padmé. Ahsoka arrives just in time to prevent Sing from hitting Padmé dead on target with a sniper blaster, but the senator suffers a flesh wound on her shoulder and Sing manages to get away. Ahsoka devises a trap to catch the assassin by having a luxury droid that's wreathed in a robe take Padmé's place at the conference while Padmé casts her speech through the droid via telecommunication from her quarters. Nevertheless, Sing sees through that plan and prepares to ambush Padmé. Just in time, Ahsoka senses Sing's intent and intercepts her before she can carry out her assassination attempt. After Sing manages to wound Ahsoka, she gloats that she was sent by an old enemy of Padmé's to carry out revenge just before Padmé manages to surprise the bounty hunter with a hidden blaster, stunning her to be picked up by Captain Typho.

Ahsoka and Padmé return to Coruscant, where they are received by Master Yoda and Anakin. Following their report, Ahsoka uses her improved precognitive abilities to find out who is behind the assassination attempt. Although Ahsoka gets only a few blurry impressions, Padmé is able to deduce that the main culprit is Ziro the Hutt. When Anakin and Ahsoka visit Ziro within his cell along with her master, Ahsoka slyly manages to make him blab out that he is indeed behind the assassination. Satisfied, Ahsoka and Anakin leave Ziro to serve an additional term in prison while the Hutt hollers vows of revenge.

Padmé is desperately trying to arrange a party for Senator Aang and, despite Anakin's efforts to ease her mind, the stress begins to bear down on her, especially since C-3PO is also quite fuzzy about the arrangements. Afterwards, Anakin sends out Threepio and Artoo to fetch the Jogan fruit that Artoo had forgotten to buy for dessert - Jogan fruit cake, which is Aang's favorite dessert.At the market, Threepio chastises Artoo for his (at least what he considers) incompetence, but gets himself swindled by the fruit vendor. Right after the purchase is made, a techno-service droid named Todo-360 approaches them and suggests that they take a break at a nearby Droid Spa for a cosmetic overhaul. Artoo takes the offer enthusiastically, but as he races off to the facility, Threepio is kidnapped by Cad Bane's droid gang.

While Artoo enjoys the spa's amenities, Threepio is brought to Bane's hideout in one of the industrial areas of Coruscant, where his databanks are brutally scanned for information on the Galactic Senate Building's layout. Threepio's memory does not contain this information, but Threepio mentions that Artoo might know. As a result, Bane decides to change targets. As Artoo exits the Spa and finds Threepio missing, he is promptly pursued by Todo and HELIOS-3E. Artoo manages to hide in a dark alley, but after he hears his pursuers preparing to dismantle Threepio, he surrenders himself.

After Bane manages to obtain the information he is looking for, he has the two droids mind-wiped and dumped back in the place where they were snatched. The two droids return with their purchase, none the wiser about what had befallen them, just in time for the cake to be finished and served to the delighted Aang. Meanwhile, Bane travels to Tatooine and delivers the plans to his employer, Jabba the Hutt. Jabba, however, immediately offers Bane yet another assignment and contacts the Hutt Grand Council for a private conference. Bane's new mission is to free Ziro from prison, as he possesses confidential information which might prove fatal to the Hutts should the Republic authorities get their hands on it. Bane readily accepts the job.

Cad Bane and his crew of Bounty Hunters along with a few droid enforcers arrive at the Senate landing zone, where they meet a host of Senate Commandos, who are not happy with their unauthorized arrival and try to arrest him. However, three commandos are sniped by Aurra Sing from long-range and the rest of the bounty hunters overwhelm the members of the squad. A Commando Droid deceives security into thinking that the Senate Commando squad had taken care of a group of protesters against the war before promptly taking their uniforms. Sing and the rest of the bounty hunters come.A few levels above in Senator Padmé Amidala's office, her secret husband, Anakin Skywalker, offers to take her to somewhere in the galaxy for a few weeks, where no one will recognize them. Unfortunately for him, Padmé is too focused on her work. He passes her his lightsaber to show his devotion before kissing her. However, he is forced to hide underneath her desk as Threepio and Senator Organa are about to enter. Organa informs Padmé that they must meet in the lobby to discuss the Enhanced Privacy Invasion Bill. Meanwhile, Bane and his crew take out the rest of the Senate Commandos and then go down to the control panel room and subdue the droids there, leaving Robonino to get the power down. The Bounty Hunters then leave to talk to some senators. Suddenly, once all the senators are gathered, the Bounty Hunters surround and take them hostage. Senator Philo attempts to leave only to be shot by Bane in the back. He then communicates with Chancellor Sheev Palpatine, demanding the release of Ziro the Hutt from captivity. Palpatine refuses to do so. Unfortunately, Bane proves his point by locking down the entire building, severing all communication with the outside. He takes everyone's comlinks, but before he can search Padmé, who is holding Anakin's lightsaber in her sleeve, Bane notices Anakin in the upper levels and orders an IG-86 Sentinel Droid and Shahan Alama to get him.

Anakin manages to elude his pursuers and hot-wires a terminal to communicate with Palpatine. The Chancellor advises Anakin to get to the central power core to contact for help. Anakin manages to disconnect and hide before the bounty hunters find him. He then uses a mind trick to convince Alama to check the other two floors. As the hunters split up, Anakin follows the IG-86 sentinel droid and manages to bash it into submission. Alama comes back down to check and finds the droid's mangled remains. Noticing no lightsaber slashes, he quickly figures out that Anakin isn't armed. He reports this to Bane, who sends Sing to assist him.

Anakin manages to locate the power core, but a panicked Robonino shuts the door behind him. Alama then come up behind Anakin. Although Anakin grabs his gun, Sing then attacks Anakin and Robonino shocks him into unconsciousness.

Bane then gives Palpatine instructions to give a pardon chip to Orn Free Taa to be transported to the prison where Ziro is being held. 3D then comes in to take the Senator. They arrive at the prison and ship Ziro away.

An unconscious Anakin is dragged into the lobby, where the Bounty Hunters start to plant bombs that can go off if their laser detectors are triggered. This enables the Bounty Hunters to leave the Senate unhindered, despite an attempt by Orn Free Taa, Palpatine, and Clone Commander Fox's detachment of the Coruscant Guard to have them arrested. Anakin wakes up and Padmé gives him back his lightsaber. He then manages to save everyone by cutting a hole in the floor and dropping everyone one floor down right before Bane triggers the bombs anyway for the Clone Troopers' interference. Padme then thanks Anakin for his daring escape.

Cad Bane liberates Ziro from prison and they escape successfully. Ziro congratulates Bane on a job well done, but Bane states that it's time to pay and he doesn't work for free.

Following his liberation, Ziro has been brought to the swampy Hutt homeworld of Nal Hutta since he is holding critically incriminating information about the Hutt Clan that's stored in a holo-diary whose location only he knows. Ziro ensures his own safety by claiming that if something happens to him, the information would be immediately sent to the Republic authorities. However, Ziro has an ally in the singer Sy Snootles, with whom he had entertained a romantic relationship. After learning that Ziro is being held captive in the Hutt stronghold, she secretly visits him. Ziro exploits her affection for him to have her break him out and the two escape into the swamps to the abode of Mama the Hutt (Ziro’s grotesque mother), who provides him with a starship so he can travel to Teth.On Coruscant, Obi-Wan is entrusted by the Jedi Council with the task of retrieving Ziro and bringing Cad Bane to justice with the help of the skilled, but rather free-minded, crazy and impulsive Jedi Master Quinlan Vos, whose company is not exactly a delight for Obi-Wan. Nevertheless, Vos is well-informed about the possible reason why Ziro has been freed, so they travel to Nal Hutta. The Hutt Council denies any knowledge of Ziro’s and Bane's whereabouts and Obi-Wan is reluctant to confront them openly since the Republic owes the Hutts for their contributions to the war effort, but Vos states that they could have freed him, much to Gardulla's resentment. He then detects Ziro’s presence by psychometrically scanning a cup Ziro has drunk from. As the two arrive at Ziro’s detention cell, they find him already missing and promptly attempt to track him down. Shortly afterward, the Hutt Council also learns of Ziro’s flight and once more Cad Bane offers his services (for a fee) to retrieve the renegade Hutt.

The two parties successively follow Ziro’s trail to Mama’s abode and learn of his intent to get to Teth. In the meantime, Ziro and Sy retrieve the diary from its hiding place, the grave of Ziro’s father. However, Sy, out of greed and a grudge against Ziro for having abandoned her, turns on the Hutt and blasts him to death. The Jedi and Bane meet beside the corpse and immediately begin to slug it out between themselves. While Obi-Wan intends to bring Bane to justice for the Senate Hostage incident, Bane is tempted by the reward for two Jedi delivered to the Separatists. The Jedi press Bane hard, but he barely manages to get away with his innate skills and the help of Todo. After this event occurred, Sy delivers Ziro’s holo-diary to her true master: Jabba.