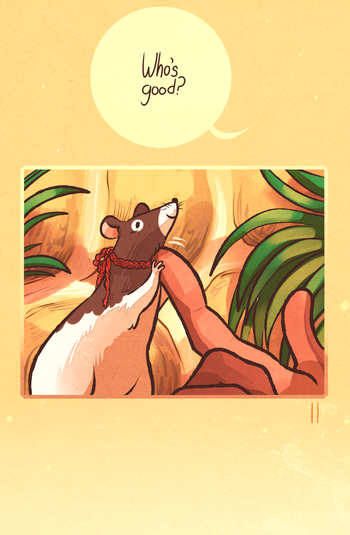 C’mon… They adore you. I can’t count the times they’ve come and told me how cool and nice you are. Magicians… don’t care about us. We’re invisible to them without a familiar at our side… But you see us. That means a lot to the kids. And me.
—Tobi

The chapter opens on a tableau of various characters starting their days: Ana beating dust from a rug, January tuning a violin, Tetsu removing a steaming loaf of bread from an oven, Philomena enjoying a hearty breakfast, and Ivy waking up Lucy like she did yesterday. But this time Lucy's ready to catch her as she leaps from the windowsill, and they get ready at a more relaxed pace. Once they're dressed, they head out the door, nervously calling out that they're leaving. Several seconds pass with no response, and they turn to leave with a perturbed expression.

As Lucy and Ivy set out, Ivy reminds Lucy about yesterday's shopping list. They affirm they have it, complaining that it doesn't make sense that Rothart made such a big deal out of it, as they would have gotten everything on the list of their own accord and they're the only one responsible for cooking anyway. Lucy preemptively grouses about having to carry the groceries all the way up the hill, and Ivy points out that there's another market nearby and they don't have to go to San Carlucco. Lucy admits they're going out of their way for a group of kids, which Ivy teases them about.

The scene shifts to the busy San Carlucco marketplace, and amidst the crowd of shoppers we see a crowd of young nonmagical kids — Martha, Rascal, Hanzi, Peony, and Billy — sneaking to meet under a table. None of them have seen Lucy yet, and Peony starts to worry that they aren't coming to the market today when Hanzi spots them. The kids quickly have a discussion, which Rascal wins, over who gets to meet Lucy first. Rascal hurries up to Lucy, starstruck, and when Lucy notices them they sneak them a pair of peaches. Rascal dashes back to where the kids have set up shop.

As Rascal shows off the peaches Lucy gave them, a new nonmagical kid, Sasha, shows up. She chastises them for sitting and waiting for snacks, bringing up that someone named Seiji has asked them to bring him money. They brush her off, saying they're too hungry to go out and get food, and she launches into a tirade about how you have to actively take what you want. She storms off in a huff, grumbling that the other kids are just lazy good-for-nothings, and sets off to find someone she can steal money from.

Soon enough, she spots January sitting on a fountain, playing her violin with her eyes shut. More relevantly, she sees that January's been successfully busking, and she sneaks up to grab a handful of change from her hat. January notices, though, and in a panic Sasha grabs the entire hat and flees as fast as her little legs can carry her. January gives chase, and is about to catch Sasha when Philomena interrupts. As Sasha escapes, January tries to disentangle herself from Philomena, but Philly doesn't notice that January's trying to leave urgently. By the time Philomena asks January to play her a song, it's too late. January acquiesces because of her crush on Philomena, and Sasha hides behind a barrel to catch her breath. She returns to the kids' home base, showing off the money and letting slip her crush on Seiji, but is upstaged by Hanzi bursting into the tent and revealing that Lucy's snuck him an entire baguette, causing the kids to cheer about "LONG BREAD!"

As Billy and Martha leave to take their turn collecting food from Lucy, we cut to Ana and her abuela selling their weaving and gossiping about various passersby in Spanish. Ana spots the twins tagging along behind Lucy and dismissively remarks that "of course they're popular with those street kids." Lela prompts Ana to tell her more about Lucy, and she takes the opportunity to complain about Lucy's standoffish attitude. As Ana gripes that Lucy acts like they're better than everyone else, Lela quietly takes note of Lucy sneaking Billy and Martha some tomatoes.

We cut away to Lucy entering a bakery, where Tetsu stands behind the counter helping another customer. Tetsu pauses to greet Lucy, who noncommittally replies as they make a beeline for a bookshelf. With a little help from Tetsu, Lucy finds the book they were looking for: a new volume of a series called Chronicle of the Triad. As Lucy settles down to read, the kids in their "fan club" gather outside the bakery window to watch.

Lucy starts to get absorbed in the book, where the eponymous Triad prepares to engage in battle with an anthropomorphic crocodile monster, when the bakery door jingles open and January and Philomena enter. Philomena explains to Tetsu that she's buying whatever January wants, since it's her fault Sasha was able to get away with January's busking money. Hearing Philomena's voice, both Tetsu's mentor, Neith, and her wife, Isra, come out and say hello.

Isra congratulates Tetsu, January, and Philomena effusively for passing yesterday's test, overwhelming Tetsu with affectionate pride, Philomena mentions how glad she was to have a potluck to divert her dad's attention, as she's still embarrassed about her performance, and January brushes off Tetsu's embarrassment by mentioning that the entire guard station was just as enthusiastic as Isra is. As the five cheerfully discuss the test, Lucy grows more and more overwhelmed, until Philomena turns to leave. Spotting Lucy's book, she tries to strike up a conversation over their shared interest, but by this point they've had enough. They stand up, pay for their book, and leave without a word.

Inside the bakery, Philomena wonders what she did wrong, and outside the bakery, the kids chase after Lucy. Ivy follows them, begging them to talk to her, but they're barely holding in tears. They finally find a doorway to hide under, and as they sit down they finally let it out. The street kids watch from a nervous distance, discussing how they might be able to help Lucy. Hanzi decides to start calling for Tobi, who happens to live in the townhouse Lucy's having a breakdown under. Hearing the kids, Tobi comes out and spots Lucy, asking if they're okay.

Lucy's immediately smitten when they see Tobi. When they look up and the hair falls out of their face, he recognizes them as the person the beggar kids call "Eyepatch." He comments that the kids are worried about them, and when they brush him off, he insists that they adore them, confessing how much it means to him, personally, that they look out for a bunch of bedraggled kids without any magic.

Tobi: Magicians… don’t care about us. We’re invisible to them without a familiar at our side… But you see us. That means a lot to the kids. And me.
Lucy: … Oh. Wait – that rat isn’t…?
Tobi: Oh, Tater? Nope, just a regular rat. Most people can’t tell, since he’s so small. Fools magicians good enough.

Lucy finally cracks a grin at Tater being cute, thanking Tobi for helping them feel better. He laughs, telling them he's glad to finally meet them, and puts one of his flowers in their hair. The two part ways, Lucy grinning all the way back to the market as the kids follow along. The setting sun suffuses the scene with a rosy warmth as a lovestruck Lucy sneaks the kids more food than they ever have at one time, and they cheerfully bid them farewell. The kids gather at their impromptu home base again, gleefully discussing how much food they have. As they're deciding what to eat, however, Ana sticks her head in, revealing that the kids had been meeting in the back of her and Lela's shop. She angrily shoos them, and they scatter, carrying all the food with them.

As the other kids run away, Sasha watches and begins to proudly giggle. She keeps laughing to herself, clutching January's hat to her chest, as she runs off to a secluded alleyway. With great trepidation, she tiptoes into the dark, calling for Seiji. A teenager with the telltale black eyes of a nonmagician emerges from the shadows, and it's clear Sasha's modeled her look after him. Seiji greets her casually, noticing that she's grabbed January's hat, congratulating her for it, and telling her to keep the hat. As he's about to walk away, she asks him if they can eat together. He tosses her the single gold coin, as it's "the best one", and tells her to get herself something nice. When she presses the question of if he'll eat with her, he blows her off, telling her he's busy today but will be able to eat together next time.

Satisfied, Sasha walks into the sunset, fondly holding the coin against her chest. Seiji watches her until she's out of his line of sight, grinning. As the glamour obscuring his red eyes dissolves, his familiar, Junko, steps into view and he uses a magic spell to teleport the handful of change away. The chapter ends on a similar note as how it began as we see how various characters are doing right now: Sasha holding her coin, Tobi watering his plants, Seiji petting Junko, and the other kids huddling unhappily in the shadows. Finally, we close on a shot of the Triad book Lucy bought, Tobi's rose resting in the fold.

In summary: Lucy goes grocery shopping and helps a gaggle of beggar kids steal food. January gets her hat stolen because of Philomena, who ends up stepping on Lucy's emotional toes while she makes up for it. Lucy gets a crush on Tobi when he helps them feel better.