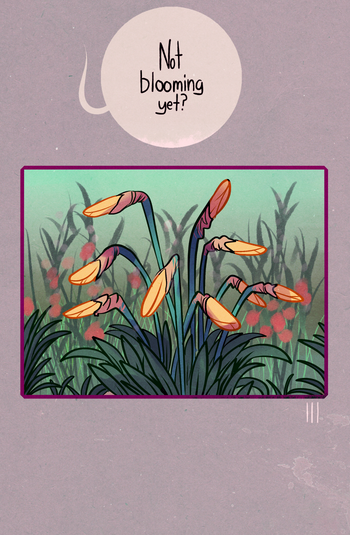 Philomena, tending to her garden.

Philomena: Lady Eudora?
Eudora: Yes?
Philomena: How do… you feel about being a representative? It’s a really dangerous job. I mean… you started when you were younger than me. And you taught Lady Yvette… Is it worth it?
Eudora: Do you think it is? You’re in the contest. And you’ve made it this far, so you must be able to handle it.
Philomena: I passed the last round because a dog already killed the bird when I found it. And I didn’t sign myself up for it. Dad did it as a surprise. I don’t know why. I haven’t even had my magic for a year. He doesn’t expect me to actually win, does he?
Eudora: Hey, now…
Philomena: No! I won’t! January has actual combat training! Tetsu makes everything they do look easy! Lucy wants it the most. Ana has the charisma! They’re all so much better suited! And me? I can’t even levitate Tully without ten tons of emeralds! I’d make the worst representative! But! I have so many friends now! FRIENDS! THAT AREN’T ARISTOCRATS! I wouldn’t have met them all otherwise. So I guess it’s worth it for that?? It’s the journey, not the destination?? ‘Cause I’m nowhere near the destination.

The chapter opens on Monday morning as Philomena tends to her family's garden. She's currently directing her attention to a cluster of immature daffodils — they're the only flowers in the garden that haven't bloomed yet. As she discusses how the flowers are doing with Tully, her dad calls her inside for her magic lesson. Noticing that she's got dirt on her skirt, her dad quickly cleans it off with magic, and she groans that she could've done it herself. She reminds him she's not a kid and he chuckles paternally, not seeming to really believe her.

As Philomena makes her way to her magic lesson, she passes Tobi in the hallway, quietly mopping next to a window. She bids him a good morning and asks if someone named Su-Yeong has returned to work yet. Troubled, Tobi tells her that she hasn't. Philomena's immediately guilty and asks for Tobi to pass along that she's sorry for what happened, as she didn't mean for Su-Yeong to get yelled at. Tobi, still perturbed, says that he will, and Philomena continues on her way.

We transition to a large, open room with orange drapery, where Eudora and her tiger familiar, Whiskers, sit. Philomena knocks on the door, and Eudora bids her to come in. As Philomena enters, Whiskers greets her at the door, and the two bid each other a good morning before starting their lesson. Eudora instructs Philomena to levitate Tully — first with her full set of emerald jewelry, next with only her earrings, next with only one earring, and finally with no earrings. As she removes jewelry pieces, the strength of her spell diminishes, to the point that when she casts with only one earring, it's too weak to actually lift Tully at all.

Philomena's discouraged by how hard it is to perform simple magic, but when Eudora tries to encourage her, she reveals that the levitation spell is the least of her worries. She's unhappy with being in the competition, she isn't sure that becoming representative would be worth it, and seeing other magicians her age doing so much better than she is makes her feel inadequate.

Philomena: He doesn’t expect me to actually win, does he?
Eudora: Hey, now…
Philomena: No! I won’t! January has actual combat training! Tetsu makes everything they do look easy! Lucy wants it the most. Ana has the charisma! They’re all so much better suited! And me? I can’t even levitate Tully without ten tons of emeralds! I’d make the worst representative!

Philomena mentions that she's at least glad to have made friends with January, Ana, Tetsu, Broom Girl, Cedric, and... maybe Lucy, as before the competition her only friends were other aristocrats — Sylas most prominently, but Seiji and Emilia are shown in full and partial shadow, respectively, when Philomena complains about them. Eudora, unsure of how to ease Philomena's worries, decides to move on with the lesson.

She's interrupted, however, by Philomena's brother, Franco, at the door. Nervously, he informs Philomena that "he's here again", and Philomena groans, telling Eudora that she'll be right back once she takes care of this. Everyone present rolls their eyes as Philomena, still groaning, follows Franco down the hallway. We see Sylas, accompanied by Seiji in much nicer clothes than he was last wearing, standing in the Vasillia entry hall, holding a bouquet of peonies. Philomena demands to know what Seiji is doing at her house, and he flippantly tells her he's "morally supporting" Sylas.note CRUNCH

Sylas announces that he wrote Philomena a poem and, ignoring that Philomena doesn't want to hear it, begins to read it aloud. It's hilariously bad, and reactions to it range from Fenn's unabashed pride, Seiji's schadenfreude, Fineas' and Franco's secondhand embarrassment, and Philomena's rage. She pelts her gardening glove in Sylas' face, knocking him off his feet, and yells at him that he's been acting weird about her for weeks and he should take a hint and leave. Seiji helps Sylas to his feet, then unhelpfully asks Philomena if he can stay, and the two leave after Philomena hits Seiji in the head with her other glove. While Sylas is still dejected, Seiji is cheerful and breezily tells Sylas that he's sure he'll get to Philly eventually.

The two teleport across town to Sylas' house, where Sylas' younger sister Emilia nearly hits them with a burst of magic. She laughs at their reactions, both to almost being hit and to the dummy she made for target practice, a model of the crocodile monster shown in the latest installment of Chronicle of the Triad.

Sylas: Emilia! What is that nightmare supposed to be?!
Emilia: It’s, haha, it’s the husk Uncle Ambrose destroyed with the Triad. The crocodile lady.

Sylas tells Emilia to be more careful with where she shoots, and he and Seiji go to the front door. Sylas, holding the twice-dropped bouquet of peonies, sadly remarks that he wishes Philomena had at least accepted the flowers. Seiji lures him into a noogie, and when the footman opens the door the various Dubois staff watch the two roughhousing. They sheepishly disengage, and the footman informs them that their tutor, Magister Lapointe, is waiting for them in the rose garden. Seiji's good mood rapidly evaporates, and he and Sylas drag their feet all the way to where Lapointe waits upstairs.

Lapointe, reclining on a chaise with her familiar, Duchess, in her lap while a member of the Dubois staff pours her tea, bids them a good afternoon. Seiji, stiff as a board, grins and loudly bids her a good afternoon in return, nearly leaning in front of Sylas as he does so. The two sit on a sofa opposite Lapointe, who glares at Seiji for putting his arm around a waiting Junko. Lapointe then congratulates Sylas on passing the third test round... and expresses disappointment in Seiji for failing the second round, as she'd expected him to outlast Sylas.

She then begins griping about how difficult Eudora is to work with, and how much she wishes Yvette still held Eudora's representative job. Seiji cuts in that Yvette can't have been that good, since she disappeared and is presumed dead, but Lapointe sharply steamrolls him: no, she was perfect! So easy to work with! She practically danced on her puppet strings! Lapointe sure is glad that Sylas is primed to take her place! On that note, she begins their magic lesson, and we cut to Lucy doing some embroidery on a magenta cape, where the chapter ends.

In summary: We learn about Philomena's struggles with magic and her overbearing dad. Sylas and Seiji pay her a visit so Sylas can read her a poem, which does not impress her. We meet Magister Lapointe, the main villain of the comic.