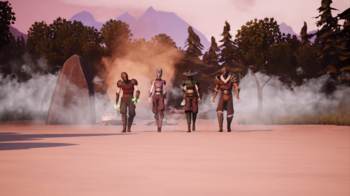 "Team... give them hell."
Competition day is here for Tari and MD-5. It's time to gear up, sling spells and execute the glitch!
Advertisement:

It's the day of the underground Tempest tournament, and MD-5 have snuck their way in to execute Operation Silent Demon. But after a slow start caused in part by Tari briefly ending up in a mysterious void, MD-5 must not only find spells and fight their way up to the mountain to execute the Deep Mountain Clip, but face off against a sinister squad of elite players.