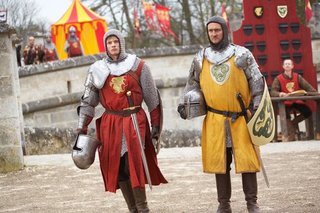 A tall, dark and reasonably handsome stranger enters a shady shop where a man is waiting with a shield made especially for him; one that he promises will help him win the upcoming tournament. With a spoken spell, three snakes on the shield’s surface come to life and Valiant is told that during battle he can pin his opponents under the shield and let the snakes do whatever he commands.

In a twist that absolutely no one saw coming, Valiant takes the shield and commands the snakes to kill the storekeeper, and after a slow-motion gallop to demonstrate how badass he is, Valiant enrolls in the Camelot tournament.

Meanwhile, Arthur and Merlin are training in the meadows outside the city. In his first day as Arthur’s servant, Merlin gets repeatedly whacked around the head and body with a sword until he collapses on the ground.

Back in the physician’s quarters, a sympathetic Gaius massages Merlin’s shoulders, but slaps the back of his head when Merlin once again resorts to magic for simple tasks. When Merlin complains about the list of duties that he’s expected to do, Gaius takes a moment to defend Arthur.

Gaius: We all have our duties. Even Arthur.
Merlin: It must be so tough for him with all the girls and the glory.
Gaius: He is a future king. People expect so much of him. He's under a lot of pressure.
Merlin: Ah! That makes two of us.

Merlin seeks help at Guinevere’s house. As the daughter of the blacksmith, Gwen can identify all the various pieces of armour and shows Merlin how to strap them on. However, he’s still having trouble when the time comes to fit up Arthur for battle…and needs to be reminded to give him his sword.

On the tournament grounds King Uther welcomes the assorted knights to the competition, announcing Prince Arthur as the reigning champion and promising one thousand gold pieces to the winner. Morgana and Guinevere watch from the stands. Before Uther joins them, he stops by Arthur and pointedly claps him on the back.

Uther: I trust you will make me proud.

There is a montage of the knights fighting, at the end of which Valiant approaches Arthur and congratulates him on his victories. As he leaves, Merlin quietly calls him a “creep” and gets his first (though short-lived) smile out of Arthur.

In the throne room the competitors line up to meet Uther, and the king commends Valiant on his fighting. On introducing him to Morgana, Valiant kisses her hand and asks her if it’s true that the winner of the tournament gets to escort her to the feast. A few paces back, Arthur watches with a wry smile as she confirms this.

Valiant: Then I will give everything to win the tournament.

When it’s Arthur’s turn to greet Morgana, Guinevere watches with amusement as Morgana drops Valiant’s name into the conversation, and Arthur accordingly rises to the bait.

The next morning Merlin enters the armoury and is distracted by a hissing sound. He leans down over Valiant’s shield and sees one of the snake heads blink at him. Before he can investigate further, Valiant interrupts him with the point of his sword and sends him on his way.

In Arthur’s quarters, Merlin easily gets Arthur into his armour without forgetting anything, at which point Arthur voices his begrudging respect. Outside, Gaius notices that Merlin is considerably more upbeat this morning, and suggests that perhaps he’s beginning to enjoy himself.

During the tournament, Valiant finds himself struggling against Sir Ewan. Pinning him down underneath his shield, Valiant commands the snakes to strike him. With Ewan down, Valiant takes the victory and Gaius enters the arena to attend to the fallen knight.

In the physician’s chambers Gaius examines Ewan’s body and notices the snake bite on his neck. This rings a bell with Merlin, and after he hears that Ewan will die without venom from the snake to concoct an antidote, he goes to investigate further.

At Valiant’s door, Merlin watches as Valiant feeds a mouse to the snakes on his shield and is very nearly caught in the act of spying. Racing back to Gaius, Merlin claims that Valiant is using magic to win the tournament, but Gaius warns him that without proof no one will take the word of a servant over that of a knight.

The two come up with their own plan: if they can cure Ewan, then he can tell the King about Valiant’s shield. But to do that, they’ll need venom from one of the snakes. Merlin uses magic to unlock the door to Valiant’s room, but when he is distracted by a noise from the corridor he very nearly gets bitten by one of the snakes that has slithered all the way out of the shield. Just in time, Merlin swivels around and cuts off the snake’s head.

After Gaius has extracted the venom from the snake’s fangs, Merlin takes the head to Arthur and tells him his story.

Merlin: I know I'm just a servant and my word doesn't count for anything. I wouldn't lie to you.
Arthur: I want you to swear to me what you're telling me is true.
Merlin: I swear it's true.
Arthur: Then I believe you.

In the council chamber Valiant is brought before the king and the court. Meanwhile, in the physician’s quarters, Ewan awakens and tells Gaius about Valiant’s shield. After reassuring him, Gaius goes to fetch some herbs – at which point another snake slithers down from the rafters to finish Ewan off.

Arthur formally accuses Valiant of using magic to cheat in the tournament, which Valiant patently denies. Arthur presents the snake’s head for Uther’s inspection and promises a witness to collaborate his story. However, when Gaius returns to his rooms he finds Ewan dead, and after Uther inspects what looks like an ordinary shield he is furious to discover that Arthur’s accusations are based on the testimony of his servant. However, Valiant plays the gracious knight card and requests that both Merlin and Arthur be pardoned for their mistake. Arthur is forced to apologise.

Back in his room, Arthur blames Merlin for his humiliation in front of the court and fires him.

Merlin heads for the dragon’s cave and insists that he can’t possibly be the person that the dragon thinks he is.

Merlin: I just came to tell you: whatever you think my destiny, whatever it is you think I'm supposed to do, you've got the wrong person! That's it. Goodbye.
Dragon: If only it were so easy to escape one's destiny.
Merlin: How can it be my destiny to protect someone who hates me?
Dragon: A half cannot truly hate that which makes it whole. Very soon you shall learn that.
Merlin: Oh, great. Just what I needed, another riddle.
Dragon: That your and Arthur's path lies together is but the truth.
Merlin: What is that supposed to mean?
Dragon: You know, young warlock, this is not the end. It is the beginning.
Merlin: Just give me a straight answer!

Outside on the castle steps Gwen approaches Merlin and hesitantly sits next to him. Despite not knowing how he’s to proceed, she encourages him to carry on and prove that he was right about Valiant. Catching sight of a dog statue in the courtyard, Merlin gets an idea…

After wheel-barrowing the dog into the physician’s chambers and fetching his spell-book, Merlin begins to practice a spell on the statue. Unbeknownst to him, he is not the only one touched by magic in the castle. Upstairs in her room, Morgana wakes from a nightmare in which Arthur is in mortal peril. She crosses the room and looks out the window to where he’s practicing in the courtyard outside.

That same evening, unable to get the spell to work properly, Merlin goes to Arthur’s chambers and urges him not to fight on account of Valiant’s shield. Arthur admits that he does believe that Valiant is using magic, but he can’t withdraw on account of being thought a coward.

Arthur: Don't you understand? I can't withdraw. The people expect their prince to fight. How can I lead men into battle if they think I'm a coward?
Merlin: Valiant will kill you. If you fight, you die.
Arthur: Then I die.
Merlin: How can you go out there and fight like that?
Arthur: Because I have to. It's my duty.

Arthur is having his armour fitted by another servant when he’s interrupted by Morgana who takes over. She tells him that she used to help her father with his armour when she was younger, and then gives him a heartfelt warning to be careful as he leaves the room.

As Arthur and Valiant begin to fight, Merlin’s spell finally works and the dog statue comes to life. Trapping the rather ferocious dog in his room (and warning Gaius not to go in there), Merlin races out to the tournament grounds.

The fight comes to a brief halt when Arthur knocks Valiant’s helmet off and wins himself a cheer from the crowd when he removes his own helmet to even the odds. Waiting for his opportunity, Merlin utters his spell and watches in triumph as the snakes prematurely emerge from the shield.

Recovering quickly, and with nothing left to lose, Valiant orders the snakes to kill Arthur. Having lost hold of his sword during the fight, Arthur is defenceless. Morgana grabs the sword from the knight sitting next to her and throws it to Arthur. He uses it to dispatch the snakes and then runs Valiant through, proving to the audience that the bad guys on this show aren’t just going to be shipped off to jail when their evil schemes are foiled.

That night at the banquet Uther introduces Arthur as the champion of the tournament. He offers Morgana his arm to escort her to the table, but by the end of their walk they’re squabbling over whether Morgana saved Arthur and to what extent. Morgana marches off in a huff to talk to Gwen and Arthur turns to Merlin.

Arthur: Can you believe Morgana? She says she saved me. Like I needed any help. I wanted to say I made a mistake. It was unfair to sack you.
Merlin: No, don't worry about it. Buy me a drink and call it even.
Arthur: Er, I can't be seen to be buying drinks for my servant.
Merlin: Your servant? You sacked me.
Arthur: Now I'm rehiring you. My chambers are a complete mess. My clothes need washing. My, er, armour needs repairing. My boots need cleaning. My dogs need exercising. My fireplace needs sweeping. My bed needs changing. And someone needs to muck out my stables…