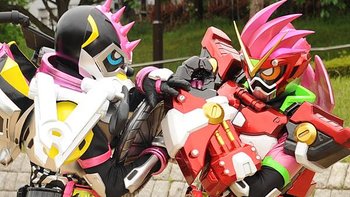 I trusted you! And this is how you repay me!?

Apparently Hiiro wasn't the only accomplice that Masamune had in the palm of his hand! Cronus suddenly summons Kamen Rider Lazer Turbo Level 0 into the fight. In order to further expand the presence of Kamen Rider Chronicle around the world, Lazer Turbo stands before the Doctor Riders in an attempt to keep them from ending the game! Much to the shock of everyone there, Kamen Rider Lazer Turbo finally reveals his identity...