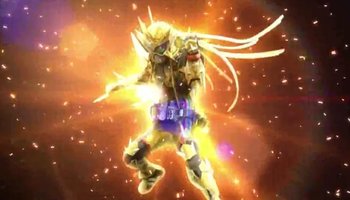 Now I'll show you, the gameplay of the Invincible Golden Gamer!

All of a sudden, Genm Corp. suddenly announces a new addition to Kamen Rider Chronicle! The "Cronus Capture Quest!" The purpose of it is in order to increase the number of Kamen Rider Chronicle Ride-Players. All while knowing what dangers lie ahead, thousands of players join the game! Meanwhile, Emu is still reminded of the message Kiriya said to him before Masamune took him away. Kuroto also quickly completes an invincible golden Gashat holding an unbelievable amount of hidden power! It was Ex-Aid and the others who rushed to stop the "Cronus Capture Quest" when Brave and Lazer Turbo stand in their way once again...