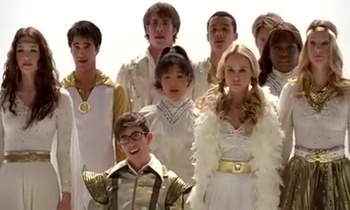 We start today's installment of this oh so guilty pleasure with Blaine offering Trouty Mouth $50 to stop him from stealing macaroni. Okay, Blaine? Last time I checked, Trouts was living with the Hud-mel's, not his own family. We are then spared more false continuity by Trouty saying it's not for him to eat, but for him to use for his macaroni art. Title Drop, you see. Portraits of Emma Stone, Leann Rimes, Ralph Macchio, Duck Dynasty and Kurt are on display; when it's Blaine's turn to say what his guilty pleasure is, he can't for said guilty pleasure is talking to him. Therefore, he on the spot declares Wham! as his guilty pleasure. Tina arrives to announce Will's out with the flu; with him gone and Finnegan in self-exile, that leaves New Directions to teach themselves. Trouty then makes the obligatory remark about the "vapo-rape" as Blam decides to helm the class while we decide to hit the Title Card.

Choir Room. ND has assembled as Blam reveal the obvious assignment. After the expected Double Entendre about revealing secrets, the mention of Wham! is of course the signal to cue up the first Shot-for-Shot Remake this episode, featuring Blam in short shorts that we didn't need to see them wearing. Afterwards, we cut to Brittany, who is clearly getting bored of Trouty (as are we all) and thus wants her vicarious Cheerio lady kisses, telling Kitty that everyone hates her. Yes. In true Brit-Brit fashion, we get her take on a "The Reason You Suck" Speech, saying Kitty calls Marley fat while her own face looks like a soccer ball. Ouch Brit. Ouch. The crux of this is "Fondue For Two" where to whit:

So Kitty, everyone at school hates you because you're a two-faced lying slut who no one can trust.

Yeesh. Kitty agrees, then the two of them reveal their guilty pleasures, some designed for "humor"note Farting in front of old people so they think they did it, assuming animals are racist due to their fur color., with the relevant one being the Bring It On films, which they both agree they love (except the last one). Oh, and Lord Tubbington's is the Church of Happyology. Hmm. Anyway, Kitty has one more too horrible to say out loud so of course it will be revealed later. Over to NYADA, where Kurt's acting class wants the students to act out their guilty pleasures WHAT A COINCIDENCE! This cues a V/O about how Kurt has many and sundry guilty pleasures: Binge watching shows with powerful womennote The Golden Girls, Murder, She Wrote, Moonlighting, Designing Women., exercising to Richard Simmons, and his darkest secret, a boyfriend pillow, ordered while on Ambien. A pillow with an arm and hand attached, which is a bit creepy. He's called Bruce. I need a hug. From there, we cut to the locker room, where Trouty pulls Blaine aside to tease us with him saying he's gay. This is of course a Bait-and-Switch dammit, the truth is that he is, in fact, a Barry Fan-ilow. Fun fact!: This was originally going to be Taylor Swift, but probably because Chord Overstreet had been dumped by Swift for Dianna Agron this was changed. Not until they'd filmed it all, though, with the original scene used in the promo and a possibly-mutilated version of "I Knew You Were Trouble" bouncing around on the Anders' hard-drive in cyberspace somewhere.

After the break, we see Kitty and Brittany ambushed by the other ND women demanding to know what Kitty's guilty pleasure is. Brittany, as it should be, helpfully reveals that it's the Spice Girls. We henceforth know what song's in the offing as we cut to a rare peek inside Rachel's bathroom! What will we find... sadly, there aren't any pictures of Dear Lucille on the walls (those are reserved for Rachel's eyes only), but there are far too many beauty products that happen to be Kurt's (disappointing). Santana's complaining about them not making any room for her after she barged in and refused to pay any rent - what kind of friends are they?! With Rachel in the shower, she threatens Kurt to give her some space or she'll tell Rachel that Brody is a whore. Rachel appearing from the shower, trying to wrap a towel around herself when she notices Santana is present, gets a nice compliment because Santana has grown up and can now admit that the girl is not actually unattractive. From there, we find that Brody has gone ahead and dumped Rachel due to fear of being outed as a gigolo. She will of course find out later on because did we mention this is the last episode of him ever? Isn't that a good feeling. Santana then offers playing pranks on Kurt to cheer Rachel up. The pair stumble upon Bruce, which is prank enough. Back to the choir room where Trouty admits to being a Fan-ilow. Lovely. Afterwards, it's off to the auditorium, where the girls are bickering over who can be which Spice Girl, but Tina isn't included because this is Tina we're talking about and with Jenna Ushkowitz' talents she really deserved better. In fact, Tina bursts in as usual, and now announces that Jake is planning on doing Chris Brown music... oh hell no, not the poster child for Would Hit a Girl. Jake, you're an idiot. Marley confronts as we go to break.

We return to the library, where Trouty finds Blaine and gets him to admit his own guilty pleasure, which we know is Trouty, because Blam isn't canon. Blaine still demurs as we cut to Marley rightfully lambasting Jake for his choice. Jake futily tries to convince the girls that even though Chris Brown isn't good, his music is, and that's why it's a guilty pleasure - but his main argument is basically him insulting Britney Spears, and with Brittany in charge this has sealed his fate. No Brown. Cut to Bushwick where Kurt has sat Pezberry down and put blindfolds on them - wanky - then gives them each a boyfriend pillow. A few seconds later, he gets a hug from Santana and a sweet "aw, you gave mine a sex change". It's a girlfriend pillow, but she's not lame enough to give her a name. Rachel says she doesn't want her creepy boyfriend pillow because she thinks she'll get back with Brody; Santana breaks her promise to Kurt and has to tell Rachel that this isn't happening because Brodifer is a gigolo and she sent him away for good. Rachel is all kinds of displeased as we cut to Blaine at the piano for some Phil Collins and vocal venting of his feelings for Trouty.

After the break, we see that the Spice Girls have been decided: Unique is Baby Spice; Tina is Scary Spice; Marley is Posh Spice; Kitty is Ginger Spice; and Brittany is Sporty Spice, proving that even when pregnant HeMo can still do one-hand walkovers and the splits. After the Signature Song, it's Jake's turn, and he says he's still doing Brown. BOOOOOOOOOOOO! No, Bobby Brown - but after his Signature Song they all remind him that it was this Brown that supposedly turned Whitney (and daughter Bobbi) to drugs. Batting a thousand are we Puckerman? Cut to Kitty out in the hallway with Tina, who is dressed as Vicky the android girl from Small Wonder - Jake got the reference, and Kitty says she needs to find normal people to spend time with. Kittykat, this is about as normal as you're gonna get. Jake apologizes to Marley as we cut to Rachel finding Brody McWhorepants... and handing him a roll of bills. Ouch. Brody of course tries to spin it on her by saying that she was keeping Finn a secret from him, too. Right, the difference dumbass is you were cheating on her multiple times. Brody, you're a moron. He then tells her about Finnegan rearranging his face and it's now more clear than ever that Rachel's heart is for Frankenteen and no one else. At least until the final season. The breakup is official, the subsequent Radiohead confirming it. This was originally going to be just Rachel, but her boyfriends are malignant diseases. Anyway, speaking of shitty boyfriends (and we wish we were), we hit the home stretch with Trouty confronting Blaine about having a crush on him, saying he'd be offended if any gay man wasn't into him (like Kurt and Karofsky in season 2). They hug it out far too close to be friends, and Trouty says that it had best be breath mints in Blaine's pocket that he feels - regrettably, it is, would he like one? Back to Bushwick were Kurtana bond over The Facts of Life when Rachel returns. She thanks Santana for what she did because it was a good thing and Rachel has a bit of a crush on her. No - Are you sure, Glee? I mean, a Quintanna catfight wouldn't be that bad. Even so, she seems to think that out of the three of them she's been handed the worst lot (what happened to the "gay is the worst lot to be handed" MO?) and so must be allowed to choose their guilty pleasure movie musical: Mamma Mia!. This leads to us ending with the other Shot-for-Shot Remake of the episode, as hula hoops are thrown from New York to Lima because reality isn't a thing that exists any more. We must also mention how Kitty literally shoves Artie's face into her cleavage; compared with Zizes in Season 2, at least this time he's not smothered.

Now, you may have noticed that except for the Brody plotline, this whole episode had the feel of a Breather Episode. This is because Murphy wanted to soften the gleeks up for...

Next Time: The second major Wham Episode, but an episode that's definitely #1... with a bullet.