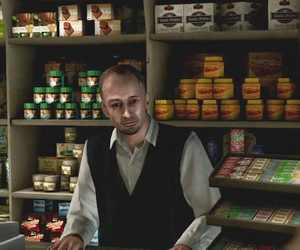 You can get anything here: tampons, potato chips, bubblegums, asthma medications, and even the ocassional murder clue.
"Lamp oil? Rope? Bombs? You want it? It's yours, my friend, as long as you have enough rubies."
—Morshu, Link: The Faces of Evil
Advertisement:

The owner/proprietor/manager of a small retail store.

In The Western and many other low-population settings, the Shopkeeper is the person who runs the "General Store" which sells (and sometimes buys) just about anything the locals or visitors could possibly need. He or she is a fairly important member of the community, since everyone visits their establishment while in town for vital supplies. This makes the general store a good informal meeting place and a handy source of local gossip. This kind of store is often the Only Shop in Town.

In larger or more modernized communities, shopkeepers tend to be more specialized, at first between perishable items and "dry goods", and increasingly narrowing down to the point where one store might only sell candles and candle accessories, and half-a-dozen shops might need to be visited for a single day's shopping trip.

A shopkeeper often fills the role of Meek Townsman in Western stories—he's got a business to protect, after all. Relatively rarely, one might be seen as a Smalltown Tyrant who uses the fact that he's the only source of supplies to dictate policy to the town.

The Asian Store-Owner, the Friendly Shopkeeper, and the Super-Stoic Shopkeeper are common enough sub-tropes to merit their own pages. If the merchant chooses to travel around to sell things instead of staying in one place, see Intrepid Merchant. Don't even think about shoplifting.