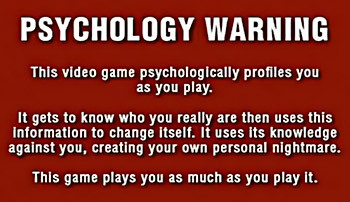 It will also be a bit of a jerk and have a cocktail or two while doing so.
"Games tend to be very trustworthy—good guys are good, bad guys are bad. What you see and perceive is real. Sometimes characters are betrayed, but the player never is."
— Ken Levine to GameSpot

The above quote from Ken Levine describes the standard relationship between a Video Game and said game's players. Games won't deceive you, Villains Never Lie (or if they do, it is obvious) and you're the one pulling the strings. Characters' expectations will be subverted but yours will not be. As such, the common relationship between the player and the game constitutes a trope. Therefore, it can be played with.

Playing The Player is a Video Game plot device that occurs when this common relationship is played with in a manner designed to make the player uncomfortable.

There are quite a few ways to do this. Most involve deliberate deception of the player (not just the player character). But it has to be a significant betrayal of the player's expectations in order to qualify, and this betrayal must be intended to make the player squirm. And this is not the only manner in which a game can do this. By definition, the game has to have a level of understanding about how players relate to it in order to pull this off.

One example of an expectation gamers have is that achieving 100% Completion, if it does anything, will make the ending happier, or at least clarify it in some way, to reward the player for going deeper into the game. Thus, a game can play with that expectation by offering up a worse ending or by adding something that turns a previously understandable series of events into one big Mind Screw, or admonishing the player (either by proxy or by Breaking the Fourth Wall) for thinking all that grinding would matter.

"Seinfeld" Is Unfunny also applies to this trope. To someone that has played, for instance, Metal Gear Solid 2: Sons of Liberty or BioShock, Final Fantasy VII does not seem to betray the player in a shocking way. Of course, to someone that has spent their time with only the earlier Final Fantasy games and no other games, Final Fantasy VII would come as quite a shock. In short, it partly behaves like a Meta Twist and depends significantly on a player's initial expectations. Arguably, as the "standard" (i.e. expected) relationship between a player and a game changes, there will be evolution in what a game has to do to qualify for this trope.

This trope is frequently seen in deconstructions but in and of itself, it is not necessarily a deconstruction. Additionally, this is not the same as having No Fourth Wall. Also, this trope often deals with plot details, so spoilers ahead. Not to be confused with The Game Plays You. Compare Player Punch, You Bastard! and Video Games and Fate.