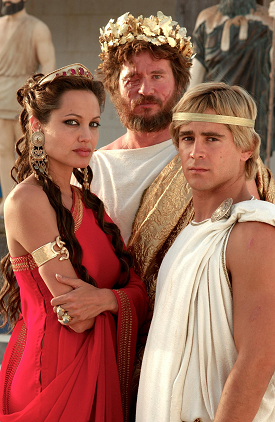 Left to right: Queen Olympias (Angelina Jolie, 29) with husband King Philip (Val Kilmer, 44) and son Alexander the Great (Colin Farrell, 28).
"Hamlet's mother will not be played by a woman who could have gone to high school with the actor playing Hamlet."
— Rule #142, The Things I Will Not Do When I Direct A Shakespeare Production

Due to Double Standards concerning age and perceived attractiveness, adult male characters are usually played by actors of about the character's age, but female characters of middle age and older are often played by actresses noticeably younger than the character should be. This becomes jarring when a character's mother, or a woman otherwise stated to be of an older generation, is played by someone only slightly older (such as in Alexander, pictured to the right)—or, in some cases, younger—than him.

Named for Hamlet, Prince of Denmark's mother Gertrude, who has traditionally been played by improbably young actresses (it's less common in more recent productions). This is most prominently and ridiculously pronounced in Laurence Olivier's film version of Hamlet, which featured Eileen Herlie in the role of Gertrude despite the fact that she was 11 years younger than Olivier himself.

A related effect tends to crop up in animated portrayals of middle-aged women. If a female character has an obviously attractive mother, expect both of them to look about the same age. That being said, male examples, though uncommon, do exist.

Sometimes this trope can be forced by a movie that covers a long period of time. If we see the mother of a small child, and then see the child grow to adulthood, it's usually easier to cast a young woman as the mother and "age" her with makeup, if at all, instead of the other way around. Some actors can be Younger Than They Look and get cast as roles that are older than they are—Jon Hamm, for instance, talks about being 25 and auditioning to play fathers on Teen Dramas.

Appears quite often in voice acting too, since looks, of course, don't matter. Due to Vocal Dissonance, some voice actors can sound much older than they are (or younger). As rather a lot of animated children are voiced by adults with high-pitched voices, it's not uncommon for the actors to be the same age or even younger than those voicing their children.

Closely related to Hollywood Homely and a side effect of Underage Casting. This is one way to invert Dawson Casting and is frequently a side effect of it (having a 40-year-old actress playing the mother of a teenager is perfectly plausible, but when the actor playing the teenager is 25, it becomes a problem.) Often overlaps with Hollywood Old, since it's usually impossible for a Hollywood Old character to have a teenage or adult child without their (lack of) age difference becoming a Playing Gertrude. However, when both actors are middle-aged or older, it's easy to have a Playing Gertrude without either character being Hollywood Old. Contrast Age Lift, where the role is changed to make the actor age-appropriate for the role. See also Absurdly Youthful Mother, where a parent is or appears unusually young in-story, as well as Mum Looks Like a Sister, where parent and child (typically mother and daughter) look like siblings instead.