Literature / Maze: Solve the World's Most Challenging Puzzle
aka: Maze 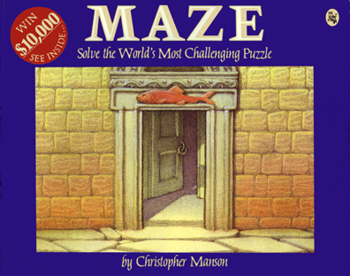 "This is not really a book. It's a building in the shape of a book."

Maze (or Maze: Solve the World's Most Challenging Puzzle to use its Long Title) is a 1985... puzzle book(?) written by Christopher Manson.

A group of people have decided to enter the Maze, which is basically a giant mansion with many rooms (only 45 shown, but there may be more). The challenge is to get from Room 1 to Room 45 and back to Room 1 again, using the various clues in the rooms and vague bits of info provided by the book's Lemony Narrator who also serves as the Maze's owner and guide.

The book has 48 pages, 45 for the rooms and 3 for the introduction/directions. In each elaborately detailed drawing, readers will have the option of 1 to 9 doors to choose from in each room which will lead them to another one. Sharp and smart readers will see past all the red herrings and be able to get from the beginning to the end to the beginning in 16 moves, which is the shortest known path. Not-so-bright readers will soon find themselves going in circles or even ending up in the Abyss, a room where entry means automatic failure.

The book was created originally as a promotion, where the person to solve it would receive $10,000. After two years, none of the people that entered solved the puzzle to Manson's satisfaction, but 12 entrants got close enough to split the prize between them.

It is still in publication despite the contest being long over, and has puzzled and confounded two generations of puzzlers ever since.

Not to be confused with the 2000 movie of the same name Maze.

Maze: Solve the World's Most Challenging Puzzle provides examples of: