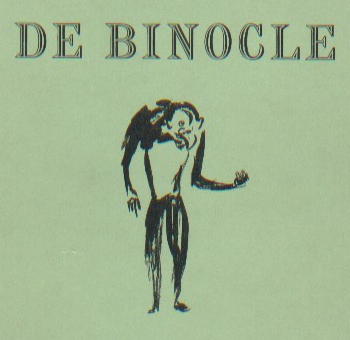 "De binocle", Dutch for "The binoculars" in the sense of an opera glass, is a Short Story by Louis Couperus that was published in 1920. The seed of the story goes back to 1897, which is when Couperus, Indo-Dutch like the protagonist, lived in Dresden himself. Another source of inspiration proposed is the 1894 drawing The Wagnerites by Aubrey Beardsley, which depicts a bald man and a grey-haired woman amidst a crowd opera visitors. "De binocle" falls under Psychological Horror as shaped by fatalism, with the protagonist narrowly escaping a call to commit manslaughter only for that very same call to resound five years later.
Advertisement:

Five years ago, the protagonist visited the Semperoper in Dresden, Germany, to finally catch a performance of Die Walküre. He has a seat in the front row of the fourth balcony and while on his way to the Semperoper he buys binoculars to have a better view. Once seated, two things happen. One, he becomes afraid he'll drop the remarkably heavy binoculars onto some unfortunate soul below. Two, he takes note of a man some rows further whose bald head stands out among the crowd. He becomes obsessed with throwing his binoculars at the man, but flees his seat before the sensation overcomes him and vows never to return. In the present, the memory of that evening has lost its edge. The protagonist laughs at how silly he was back then and decides to go to the Semperoper again, where coincidentally Die Walküre plays again and only the same seat of five years ago is still available. When he spots the same bald man in the rows below and is handed the same binoculars he bought five years ago, it's too much. He throws his binoculars, killing someone sitting nearby the bald man he'd never even taken notice of.

Because "De binocle" is short, suspenseful and laden with motif, it's a go-to inclusion for literary study in the Netherlands. Many are introduced to the story in high school, where it also is in use as a standard sample text to familiarize students with Couperus. In 2018, "De binocle" was turned into a short movie by the same name as a graduation project by students of the Hogeschool voor de Kunsten Utrecht.

"De binocle" can be read in full here.

Non-Dutch speakers can get by with automated page translations.

Tropes found in "De binocle" include: