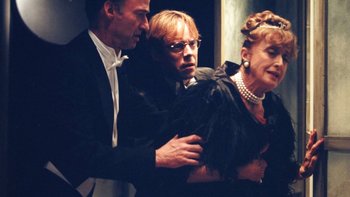 Werner, a man in late middle age, is the conductor for an orchestra which is about to play his own composition. The rather sparse crowd is already finding its seats but the performance cannot begin because Gert the tuba player, who has a solo, has panicked and is hiding up on the roof. Werner dashes to the roof, only to have an agonized Gert confess that he doesn't even like the tuba, that he wanted to play the violin, but he studied the tuba because his domineering mother forced him to. This leads Werner to make a surprising confession of his own.