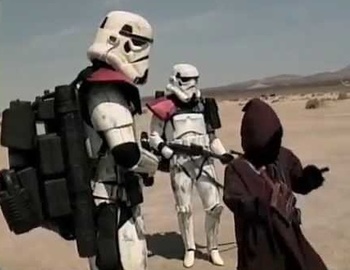 "TROOPS is filmed on-location with the men of the Imperial forces. All suspects are guilty, period — otherwise, they wouldn't be suspects, would they?"
Advertisement:

TROOPS is a 1997 Star Wars Fan Film by Kevin Rubio, considered the Trope Codifier — if not the Trope Maker — of the genre.

A dual parody of Star Wars and the reality show COPS, the short film follows a squad of Imperial Stormtroopers as they patrol on the desert planet Tatooine. It boasts professional quality costumes and special effects, and hilariously puts a couple of major incidents from A New Hope in a whole new light.

Some of the cast and crew followed it up with a sequel series, I.M.P.S.: The Relentless, released in 2005.