Film / Student Of The Year 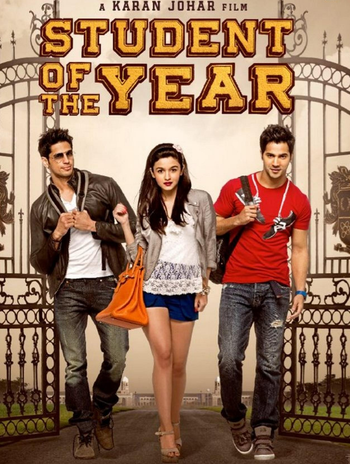 A 2012 Hindi coming of age romantic comedy film made by Karan Johar, which introduced its leads Sidharth Malhotra, Alia Bhatt, and Varun Dhawan to feature films.

The old sports coach of St. Teresa's College calls eight of his former students to inform them that their old Dean is dying and that his last wish is to see them all before he passes. Upon arrival at the hospital, old friendships and tensions resurface as five of the eight students recount the events that transpired ten years prior while they were students, the events that drove them away from each other and may or may not have driven the Dean to his current condition.

Student of the Year contains examples of: