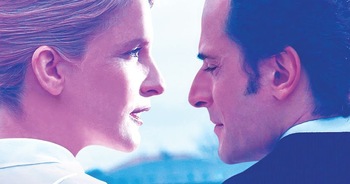 Snu: Do you know how many women in Portugal die every year in clandestine abortions or as a consequence of having them?
Censor: I don't know and I don't care.
Snu: Well, I know. And I care.
Advertisement:

Snu Abecassis is a Danish immigrant living in Portugal and founder of one of the country's most important publishers, Publicações Dom Quixote. In the years after the fall of the authoritarian and conservative Estado Novo regime, Snu seeks to help Portugal become a more progressive and prosperous country. She ends up becoming romantically involved with the politician Francisco de Sá Carneiro, one of the founders of the Social Democratic Party.