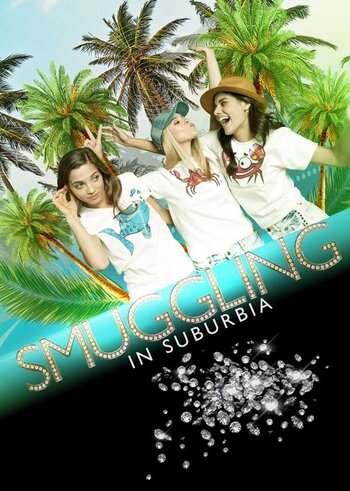 Smuggling in Suburbia is a 2019 Lifetime Movie of the Week Teen Drama/Crime Drama, directed by Doug Campbell and written by Robert Ingraham (with a story by Campbell).

Joanie Whittaker (Monroe Cline) is a high school senior in California. She's invited to a party by her ultra-glam classmates Annabel (Shelby Yardley) and Sharnae (Juliana Destefano), where she meets Danny Kellog (Bret Green), a slightly older guy, and learns why Annabel and Sharnae always have such nice clothes and so much money to throw around: they work for Danny delivering specially-calibrated lenses and cameras to high-end photographers all over the country. Joanie accepts an offer to join them as a courier. However, the "lenses" story is a front: the girls are actually trafficking illegal diamonds smuggled in from Africa. While her mother Georgia (Darlene Vogel) becomes concerned when Joanie starts taking unannounced weekend trips to places like New York and Chicago, Joanie asserts her independence. Eventually Joanie figures out the truth and threatens to quit, but two things keep her in the smuggling business: her younger brother Peter (Zander Grable) is diagnosed with cancer and needs an expensive operation, and she falls in love with Danny's business partner Tucker (Cole Reinhardt).

From the same production company as Sleepwalking In Suburbia, but not related.

Smuggling in Suburbia contains examples of these tropes: