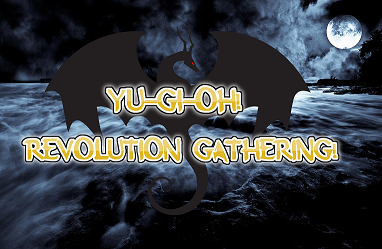 Time for a Revolution!
Yu-Gi-Oh Revolution Gathering is an on-going Yugioh fan fiction written by The Black Duelist. It is an UA OC storyline that has no direct relation to the original Yu-Gi-Oh story line and features a complete new cast of characters.

Like the original Yu-Gi-Oh and all of the sequels that have come after it, Duel Monsters reigns supreme as the most popular game on the planet. Thanks to Gemini Enterprise, Atmos City has used the game of Duel Monsters to revolutionize the city into a wonderful metropolis.

This is the story of a young boy who is on a quest to reclaim something he has lost and will resort to joining the Underground Dueling Circuit to obtain the information he seeks. Little does he know that his entire life will change completely the day he meets the CEO of the wealthiest gaming company on the planet, Gemini Enterprise.

Never Fear! A character page is under way!

To view this glorious fan fiction