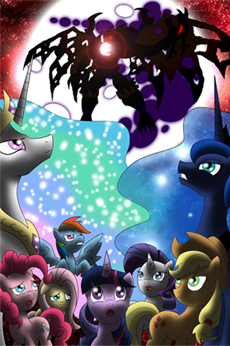 Predator's Moon is a fan crossover between Hasbro properties My Little Pony: Friendship Is Magic and Beast Wars by Atomic-Chinchilla

. The work can be found on his DeviantArt profile

The Mare in the Moon has returned, and the dark power that created Nightmare Moon is awakening again with the aid of a magical Moonstone. The two princesses and the Mane Six must use the Elements of Harmony to banish the darkness once and for all. Meanwhile, on Prehistoric Earth an alien artifact identical to the Moonstone falls into Predacon hands. A skirmish between the Predacons and Maximals Blackarachnia and Depth Charge transports them to the world of Equestria. There, the Predacons terrorize the ponies, who find new allies in the Maximals.