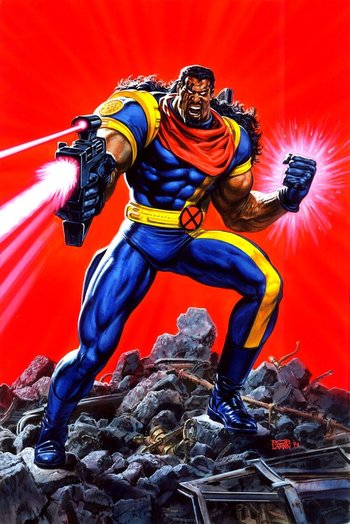 Bishop is a fictional character that appears in comic books published by Marvel Comics. The character first appeared in "Uncanny X-Men" #282 (November 1991), and was created by writer John Byrne and artist Whilce Portacio.

Bishop, full name Lucas Bishop, is a time-traveling cop from the future who found himself stuck in the past after chasing there a mutant criminal rebellion started by Trevor Fitzroy. He took on the task of terminating with extreme prejudice the remants of the rebellion, but the task proved too difficult and he ended up being captured by the X-Men, who were interested in stopping his violent ways. It's then revealed that he comes from a post-dystopic future in which humans and mutants joined forces to stop a Sentinel takeover, after which a special force named Xavier's Security Enforcers was created to police mutant population. Now without a way to return, but with possibly a way to avoid such a Bad Future, Bishop became a X-Man and lent his big guns and military training to their cause.

Post-Decimation he underwent a rather drastic Face–Heel Turn and turned into an Evil Counterpart to Cable, losing an arm along the way, dividing his time between time travel, scheming, and attempting to shoot Cable with very large guns. And global scale genocide. After Avengers Vs. X-Men, he returned to the modern day, where his allegiances have been messy.

He got four limited series including the self-titled Bishop series, where he tracked and fought Mountjoy; XSE, which showcased his past (future); and its sequel - Bishop: Xavier's Security Enforcers. He also teamed up with Gambit to oppose Stryfe in Gambit and Bishop: Sons of the Atom, where he ended up being possessed by a Phoenix-like cosmic entity named Bete Noir. He also starred in the series Bishop: The Last X-Man from 1999 to 2001, in which he was trapped in another alternate timeline. He appeared regularly in District X from 2004 to 2005, a police procedural set in a mutant ghetto in New York City. Finally, He also starred in the House of M tie-in, Mutopia.

He is portrayed by Omar Sy in X-Men: Days of Future Past.