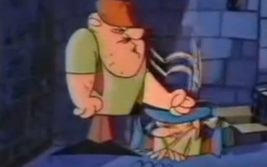 A 1967 Paramount Cartoon Studios short, which entered production under Shamus Culhane (who ultimately got the screen credit), although it was largely finished by Ralph Bakshi, "The Opera Caper" is about two unnamed french crooks who repeatedly attempt to break into an opera house to kidnap the star performer. Wile E. Coyote-esque hijinks ensue. Clearly made on the cheap, the short remains memorable for the humorous antics of the two protagonists.