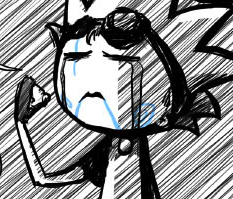 MOTIVATION!
"Since the comic starts at the beginning of my life, there isnâ€™t actually much I can tell you without giving away the story. I will tell you, though (as long as you promise not to tell anyone else), that thereâ€™s aliens, monsters, superheroes, rogue robots, pineapples, and a goat or two."
— 9 ,in the about page

is a webcomic written by 9 Bridges. It follows the story of the main character (also named 9) through his life from early childhood onwards, showing his raising and his gradual formation of his team of heroes, bent on staving off evil. He wants to be a superhero, you see.

Called SED by the fandom, and has a strong (if small) forum community.