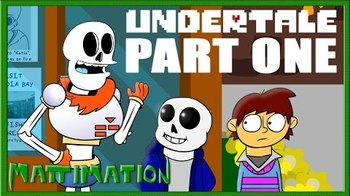 You think you are above consequences.

"This is going to be one weird day."

. Set in a post-Pacifist run, Frisk has to deal with recurring nightmares and the loss of his ability to Save, putting a damper on his peaceful life above the surface. After accidentally killing a monster, Frisk has to face the consequences of what he's done and get into some wacky adventures along the way.

Current episodes in this ongoing series include:

Due to the narrative structure of this series, beware of spoilers below!