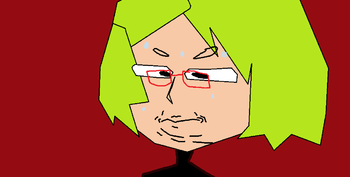 A frame from the intro

Anywhere! Astounding Girls is a new YouTube-hosted Fanime series which currently has a small fanbase. The show's animation is done in MS Paint while arrangement is done in Sony Vegas. The show follows the bizarre, usually nonsensical adventures of Tsumeme Hanareru, the lime-haired 15-year-old protagonist, alongside her group of friends including her best friend Penny Patrickson, Korimatse Matsuya, the somewhat-sassy rich girl, and several others. The show draws inspiration from Neko Sugar Girls and Sugoi Quest For Kokoro.

If you want to watch the series, the season one playlist can be found here.