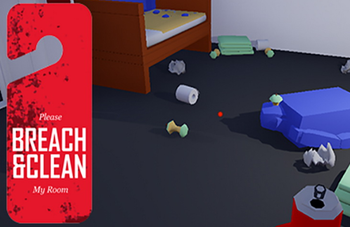 Breach and Clean is a hotel cleaning simulator, released online for free

in 2016. It is made by Vlambeer, the creators of Nuclear Throne, Ridiculous Fishing, and Luft Rausers.

You plays as a hotel cleaner, adding rolls of toilet paper, removing trash, mopping up stains, and more... sometimes while the guests are still in their rooms. Additionally, some of the rooms are locked yet still need to be cleaned - in order to get at them you must blow up the door with a breaching charge, several of which are in your cleaning cart.

Breach and Clean contains examples of: