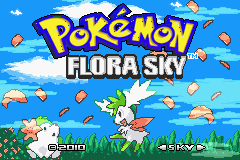 Hmm, wonder who this game's mascot legendary is?
Advertisement:

Pokémon Flora Sky is a hack of Emerald version, authored by 12345, better known as Sky or SkyHippowdon.

The plot is a mixture of Ruby, Sapphire, and Emerald's story, Giratina and the Sky Warrior's story, and original content. Flora Sky takes place in a heavily edited Hoenn region. Uniquely, the hack comes in two forms, the Main Version and the Complement Dex Version. They play exactly the same, but the Pokémon available are drastically different between versions.

It is one of the more well-known and liked Pokémon hacks out there, with plenty of Let's Plays of it on YouTube.