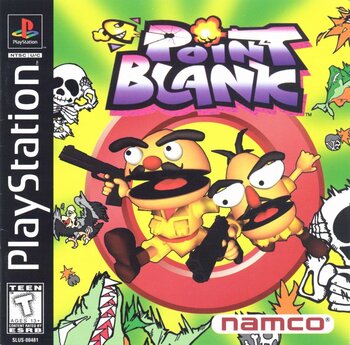 What do you get when you cross a Light Gun Game with a Minigame Game? Point Blank is an arcade shooter by Namco (creators of the equally popular Light Gun Game Time Crisis). Basically it's a collection of mini-games where you're given a task and a set amount of time, then set loose until the time runs out. Meet the requirements and you stay in the game and move on. Fail, and you lose a life (or more if you shot something you weren't supposed to). The game continues onward until you either reach the last challenge or you run out of lives.

And... really, that's about it. The game is more or less a test of the player's shooting abilities: accuracy, speed, rapid-fire, quick thinking, memorization... oh, and all these challenges are accompanied by bizarre, cartoony and colorful visuals.

There are four entries in the series that were released for both arcade and the original PlayStation (the console versions having exclusive materials such as a RPG mode or extra challenges). There's also a DS version that, of course, catered to the touch screen; this isn't so much a new version as it just a mishmash of the original three games thrown together. The 2016 reboot Point Blank X will have an HD version of the stages in Point Blank 1-3 plus with new levels to play.

The series is also notable for it two mascot characters, Dr. Don and Dr. Dan (who look suspiciously like two certain characters from Sesame Street, hmmmmm).

If you're looking for something else that's also called "Point Blank", see the disambiguation page here.