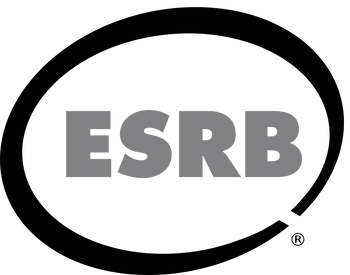 Headquartered in New York City, the Entertainment Software Rating Board (ESRB) is a consumer information bureau best known for reviewing the content of commercial software releases for game consoles and home computers — video games, visual novels, screensavers, etc. — and then grouping them into five broad categories based on age-appropriateness. In this regard, the ESRB is the software industry's equivalent of the film industry's MPA.

The ESRB only rates games released in Canada and The United States.note It previously rated games in Mexico until 2021 when it was replaced by its own rating system While other countries (notably, the Philippines) may have de facto adopted the ESRB ratings due to not having their own rating system, the ESRB does not cover these countries, and games not released in North America will not have these ratings. For information about ratings systems used in other countries, see ​Media Classifications.

A Brief Explanation of the ESRB:

The ESRB was created in 1994 as a response to controversies and government inquiries regarding violence and sexual content in video games. While sex and violence in games were certainly nothing new — violent and sexual content in games had been around since at least the mid-1970s — by the mid-1990s, advances in graphics and sound had made said content much less abstract and more "realistic". Two games served as the primary catalyst for these controversies: Mortal Kombat and Night Trap — both of which seem quaint and even hokey today, but were so controversial at the time that establishing governmental oversight of the video game industry was a very real possibility.

In order to avoid this, a coalition of video game companies — including but not limited to Nintendo, Sega, Activision, and Electronic Arts — came together and created an independent organization tasked with developing a system of rating the age-appropriateness of video games, and providing information about their content. The goal was to convince the government to allow the games industry to self-regulate rather than submit to governmental regulation.

The plan worked. Thus, the ESRB and its rating system were born.

Nonetheless, the ESRB has remained a controversial entity among the gaming public ever since its inception, and misconceptions about its purpose are common. On such misconception is the idea that the ESRB decides who can sell what game to whom. With the exception of a few Canadian provinces, the ESRB's ratings are not legally enforceable — it's perfectly legal to sell an M-rated game to someone under 17, though most retailers have voluntarily adopted policies against doing so. However, some AO-rated titles are illegal to sell to minors; see the Adults-Only Rating page for more information.

Another common misconception is that the ESRB censors games. The ESRB has no power to censor or prevent the release of any game. A company or creator may choose to remove or reduce certain content in their game in order to achieve a particular rating for sales purposes, but that's not quite the same thing as being directly censored by an outside entity.

While it's entirely possible to release a game without getting an ESRB rating at all, most major retailers and gaming-console creators require an ESRB rating before they'll allow a game in their stores or on their systems, so developers do have a certain incentive to seek out an ESRB rating.

How the ESRB Rating System Works:

The primary function of the ESRB is to provide consumers and retailers with information regarding all "pertinent" content in every game it rates. "Pertinent content" constitutes everything the ESRB looks for when rating titles: there's always the standard "objectionable" content like violence, sex, and profanity, but they also look for smaller issues that may not severely affect a game's rating, but can make a difference at the younger end of the ratings scale.

The way the rating process usually works is that a company fills out an application for an ESRB rating, where they disclose all pertinent content in their game. Then, they prepare a video of all the most graphic content included in the game. Three ESRB-trained raters read the application, review the video footage, and assign a preliminary rating separately. After a series of meetings with each other and other involved parties, a final rating is decided.

While the ESRB doesn't retroactively rate games released before its foundation in 1994, if one such older game is rereleased via Digital Distribution, Compilation Rerelease and/or Updated Re-release, it will receive a rating then. If circumstances warrant, the ESRB can revise their initial rating post-launch, but this is a fairly rare occurrence in practice.

While not overly common, it's possible for the same game to have two different ESRB ratings. While this might occasionally be a case of Same Content, Different Rating, it's much more often that two different versions of the same game get different ratings. For example, it's possible for a game's initial (or "vanilla") release to be rated "Teen" and its Updated Re-release to be rated "Mature" if stronger content was added to the game in updates.

The ESRB classifies games into five broad categories as listed below. In concept, these categories are roughly analogous to the MPAA ratings for movies: the "E" rating is similar to "G", E10+ is much like "PG", "T" is akin to "PG-13", "M" is comparable to "R", and "AO" is the counterpart of "NC-17".