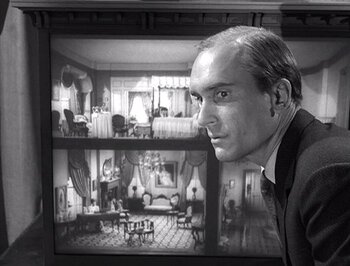 Charley and his dream house.
Rod Serling: To the average person, a museum is a place of knowledge, a place of beauty and truth and wonder. Some people come to study, others to contemplate, others to look for the sheer joy of looking. Charley Parkes has his own reasons. He comes to the museum to get away from the world. It isn't really the sixty-cent cafeteria meal that has drawn him here every day, it's the fact that here in these strange, cool halls he can be alone for a little while, really and truly alone. Anyway, that's how it was before he got lost and wandered into the Twilight Zone.
Advertisement:

While wandering through the museum after being let go from his job, Charley Parkes (Robert Duvall) looks into a dollhouse and sees, or thinks he sees, one of the figures — a man, a woman, and their housekeeper — move. Repeat visits eventually permit him to glimpse the "wife" figure actually coming to life, although conversing with one of the museum guards reveals to him that the doll is carved from a solid block of wood. Charley becomes gradually infatuated with the wife, moreso when the other figures also move and it becomes clear that the husband has an abusive relationship with the wife. Eventually, Charley can take no more and breaks into the case, attempting to rescue the wife; he continues to maintain that the dolls are alive, and winds up committed to an asylum.

Charley pretends that the delusion is wearing off, and in time is declared rehabilitated. His family and friends are at his mother's house to greet him when he returns, but as they're preparing for a celebratory dinner Charley sneaks out again; panicked, his mother calls Dr. Wallman from the asylum, who suggests that he might have gone back to see the dollhouse one more time. Meanwhile, at the museum, Charley confesses his feelings to the dolls, in particular mentioning that his rather adversarial relationship with his mother allows him to empathize with the wife's unhappy marriage.

Charley's family and Wallman arrive at the museum and instigate a search for Charley. Nobody finds a clue except for the sympathetic guard who previously spoke to Charley; he looks into the dollhouse and sees that the husband has been replaced by a doll of Charley. He merely grins and walks away.

Rod Serling: They never found Charley Parkes, because the guard didn't tell them what he saw in the glass case. He knew what they'd say, and he knew they'd be right, too. Because seeing is not always believing, especially if what you see happens to be an odd corner of the Twilight Zone.
Advertisement: