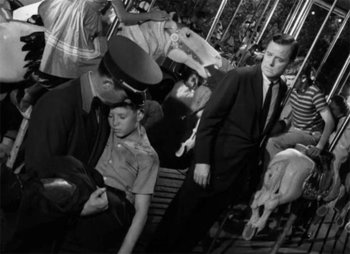 Martin Sloan (Gig Young) is an ad executive passing through town one day when his car breaks down. As he's having it serviced, he observes that he's only a mile and a half from his hometown, Homewood. He walks there, arriving to find that the year is 1934 and everyone and everything he left behind is still there, including an 11-year-old version of himself. Waxing nostalgic, he attempts to get in touch with his kid self and warn him not to waste his childhood, but his efforts only scare off young Martin. When he meets his father (dead in the present, alive here), he is met with skepticism, which is only natural. All this culminates in Martin chasing his younger self around a merry-go-round. The boy gets his leg snared in the machinery, causing the older Martin to suffer the same wound. As the panic winds down and people leave the area, Martin's father approaches, having found Martin's wallet and concluded from its contents that Martin is, in fact, from the future. Martin's father advises him that he's in this time period because his nostalgia for Homewood got the better of him, and that he shouldn't force his 11-year-old self to share his childhood, regardless of his intentions. Martin takes his father's advice and rides the merry-go-round one last time to get back to the present, carrying with him the limp his misguided attempt to meddle with his past life earned him.

Advertisement:
Rod Serling: Martin Sloan, age thirty-six, vice-president in charge of media. Successful in most things, but not in the one effort that all men try at some time in their lives - trying to go home again. And also like all men, perhaps there'll be an occasion - maybe a summer night sometime - when he'll look up from what he's doing and listen to the distant music of a calliope, and hear the voices and the laughter of the people and the places of his past. And perhaps across his mind, there'll flit a little errant wish, that a man might not have to become old, never outgrow the parks and the merry-go-rounds of his youth. And he'll smile then, too, because he'll know that it is just an errant wish, some wisp of memory, not too important really, some laughing ghosts that cross a man's mind - that are a part of The Twilight Zone.
Advertisement: