Recap / Star Trek: The Next Generation S2E22 "Shades of Gray" 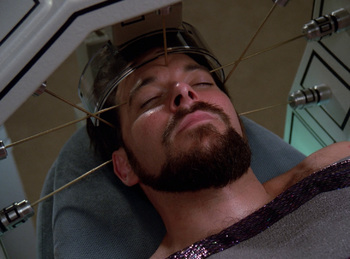 Riker is forced to relive old episodes to kill a parasite. Some of them are even good ones!
Advertisement:

When Geordi and Riker are performing a geological survey of an unknown planet, Riker gets scratched by something and has to sit down. Geordi insists that he return to the ship to check himself out, reasoning that no one knows the dangers this planet contains. Sure enough, the transporter identifies a foreign biological agent inside Riker's body. Soon his whole leg goes dead, and he's diagnosed with an alien infection that's attached to his nerves.

Pulaski tries everything she can think of, but nothing seems to work. The infection spreads, and Riker loses consciousness. If Pulaski doesn't find some solution, he'll be dead in an hour. With Troi by her side, Pulaski puts Riker into a machine that stimulates the memory centers of his brain. Riker relives events from, well, the last two seasons. That's right. It's a Clip Show!

It works! The infection fades away, and Riker wakes up feeling tired but fine. Picard insists that Riker stick around for some additional tests, joking that they need to establish that he still knows who he is. Riker counters that he knows exactly who he is: Captain Jean-Luc Picard. The captain plays along, announcing that he and Data are admirals, but Data doesn't get it and says that Picard has no authority to promote him. Oh, Data! Everyone laughs, and, for better or worse, that's the end of Season Two.