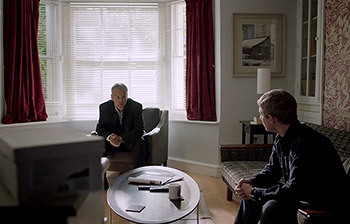 This mini-episode shows how the people in the life of Sherlock are two years after his jump in the finale of Series 2. We see Anderson being obsessed with Sherlock, showing inspector Lestrade numerous news articles of mysteriously solved cases, of which he says can only have been solved by Sherlock himself. Lestrade, however, is convinced that Sherlock's dead, and tells Anderson off. After this, Lestrade goes to John Watson, to return to him a few things of Sherlock that were still lying around at the office. One of the items was an unedited video of Sherlock, where he excused himself for not being at John's birthday party, a few years back. At the end of this video, he promises to see him soon.