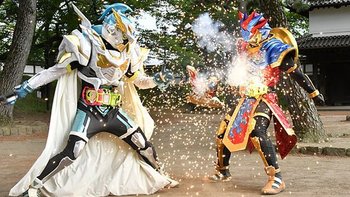 Ex-Aid finally went Muteki and was able to beat Cronus! Masamune, who does not like the fact that Ex-Aid was able to attain a power that exceeded his control, angrily forces Hiiro to work for him as he claims Saki as a hostage! Brave forcibly renews his resolution, and this time he is able to transform into Legacy Gamer Level 100! Emu is more confused than ever, while Taiga is the only one who truly understands just how painful Hiiro's decision truly is.