After the ending of My Roanoke Nightmare, the producer creates a sequel show entitled "Return to Roanoke". The actors and the real life Matt, Shelby and Lee return to the house. 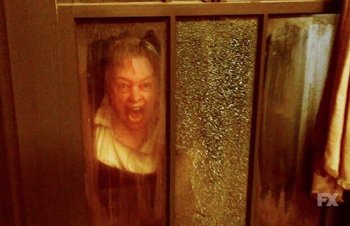 Sidney James, the producer of My Roanoke Nightmare, surprises Frank, the network president, with a pitch on-camera. He goes through the details of the reality show that audiences have been craving, including all the social media content and marketing. He plans to reunite the real Miller family and the actors who had played them for the sequel, "Return to Roanoke: Three Days in Hell". The show will be a hidden camera reality show taking place during the blood moon and Sidney intends to set up fake ghosts to scare them and capture their reactions. Frank responds by saying the original audience were disappointed with Mason's unsolved murder and his alleged murderer, Lee not being brought to justice. Sidney interjects that he's managed to buy the Roanoke House off of Matt and Shelby for 50% off its original price so they can film re-enactments. Sidney is delighted to have 13 episodes greenlit however his excitement is dampened when his assistant, Diana, informs him that Sidney refuses to take part.

In Ojai, California, Sidney is interviewing the real Shelby (Lily Rabe) ten weeks before the blood moon. She tells him she's been receiving death threats and her and Matt have split up. She had a fling with Dominic Banks (Cuba Gooding Jr.), who had played the part of Matt on the show. She wants to reconcile with the real Matt (Andre Holland) in Roanoke but insists that Dominic can't take part for this to happen. Unknown to Shelby, Dominic has already signed a contract to appear so Sidney keeps the truth from her in order to amp up the drama.

Two weeks before the blood moon, hidden cameras are installed all over the Roanoke house. After seeing the real video of Elias, Diana unconvinced and concerned about the need for jump scare tactics. Sidney dismisses her saying they're just tools for Mason's justice. One of the crew members, Alissa, finds a bag full of pig fetuses on the property but no one knows how they got there. She alerts Sidney and Diana, who know that the Polk family have been missing for weeks.

A testimony involving the actress, Agnes Mary Winstead (Kathy Bates), who portrayed The Butcher shows her talking about her casting process and experience playing the role. Sidney questions her about a mental health incident where she was seen chasing people down Hollywood Boulevard with a meat cleaver. She tries to play it off but Sidney insinuates that she's become obsessed with playing the part. He asks her about the pigs that were left on the set but she insists she had nothing to do with it. He serves her with a restraining order, barring her from any future interaction with the production. As she's removed from the set, Agnes yells at them in character.

The real Lee Miller (Adina Porter) is interviewed after agreeing to return for the sequel show in order to set the record straight. In a meeting with a legal rep, Sidney and Diana are told that production is not liable if the real Lee were to kill anything. The rep seems to be more concerned with the actress who played Lee, Monet Tumusiime (Angela Bassett) as she has an alcohol problem and production is legally liable if they knowingly let her drink.

As they arrive on set, Diana and Sidney see a body with a white sheet draped over it being carted into an ambulance. Alissa shows them a recording of the accident - Greg, one of the crew members, was cutting wood for the hot tub when his chainsaw turned and thrust into his neck, killing him. Sidney decides not to close the set for the day as the rest of the cast are about to arrive. Diana is furious and leaves. In her car, she films herself explaining what is happening on the set and why she chose to leave. She sees ahead of her what looks to be one of the Roanoke colonists so she turns her camera towards them. As she continues to drive, the Piggy Man appears behind her and kills her. The video footage was found three months after but Diana's body was never recovered.

Audrey Tindall (Sarah Paulson), the actress who portrayed Shelby, is filming a confessional which includes a blooper reel and behind-the-scenes footage of the production. She has recently married Rory Monahan (Evan Peters) who played Edward Mott. The couple arrive on the set and immediately claim the largest bedroom as theirs. Rory receives a call stating he's booked for a screen test in Los Angeles. Before leaving, he's filming on his phone when he catches a glimpse of Agnes. She smashes a window when he gets too close.

Audrey begins venting her frustration to the rest of the group and Sidney. Agnes begins to stalk her, stealing the Saturn Award she was given which Agnes was also nominated for. Audrey wants to leave however Shelby convinces her to stay. When Matt and Lee arrive, the tension begins to climb again. The group are given camera phones which capture the argument between the Millers and Lee.

Rory, Audrey and Monet begin to question what happened to the Millers as during their initial eight weeks, nothing happened. However, Matt responds by saying the blood moon is nearly there and things will start to change.

Over the following three days, every cast member died in mysterious circumstances. Except for one. The footage that follows is pieced together.

All the participants peel off to do their own things. Monet blames method acting as much as Lee's behaviour for driving her into alcoholism. Shelby tries to reconcile with a doubtful Matt. When Dominic arrives, Matt immediately attacks him until the remains of the group break it up. Audrey gets out of the shower, only to be attacked by the Piggy Man. Rory is determined to find out if Sidney has put in an actor to replace him but he's also attacked by the nurses. They're finally able to complete their murder scene.