The Butcher and the colony arrive at the house to kill the Miller family. The house's history is also discovered. 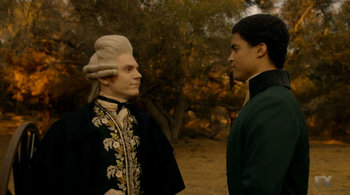 The historic story of Edward Phillipe Mott is told by historian, Doris Kearns Goodwin. Mott is an eccentric from Philadelphia who purchased the Shaker mansion at Sappony (a.k.a The Roanoke House) to use as a retreat. He filled the house with artwork and insisted on long tunnels being built beneath the mansion that lead out to the woods. Unfortunately, accidents happened to the builders of the tunnels resulting in tragic deaths. Mott had left his wife and son for his black male lover, Guinness to live at the mansion together.

Mott is quickly intimidated by The Butcher, who slashes through his prized artwork. One of the servants in the house claims to have seen invaders from the woods but Mott dismisses her. He then locks the servant staff in the basement naked until they confess their lies. He also dismisses his own lover in anger. He wakes up in the night to find the villagers have gathered at the front of the mansion and proceed to drag him to his death. Guinness, however, survives but is jailed. He keeps quiet about the trapped servants in the basement. They were found years after as the house passed through centuries of Mott descendants, the last one being Dandy Mott who died in 1952.

In 2014, Matt calls for the police to address the mob waiting outside of the house. Ambrose calls for one last time for the Millers to surrender. Shelby plans to make a quick escape with Flora but before she can do it, a human-like creature steals the child first. The previous victims try to block them however Edward Mott's ghost appears and leads them to safety via the tunnels. They emerge outside but are captured and blindfolded by the Polk family.

In the Polk's farmhouse, Elias is there as a prisoner. He's still alive however his leg has been amputated below the knee. He manages to warn Matt that "Mama" Polk took his leg and they should run whilst they can. Mama Polk arrives and offers jerky to the Millers, however upon tasting it herself, she finds the meat has gone rancid. She blames it on Elias' rot and smashes his head. She goes on to explain that the Polk family have had a deal with the Butcher for the past 200 years - the Polks are left at peace on their cannabis farm as long as they can exchange sacrifices for the Butcher. The Polks are still upset with the Millers for getting two of their boys taken by the police so they plan to hand them over to the Butcher.

In the back of a pickup truck, one of the Polk brothers is holding a loaded shotgun. Matt takes the opportunity to try and wrestle the gun off him, however, it goes off and shoots the other brother in the driving seat. They make for their escape but are quickly recaptured. Mama Polk severely injures Shelby's leg so she can barely walk, therefore hindering another escape attempt.

Meanwhile, Lee has been interrogated by the police over Mason's death. They eventually release her for lack of evidence and she asks for a ride back to the house.

The surviving members of the Polks deliver the Millers back to the mob outside the house. The Butcher offers her condolences for the Polk's dead sons. The colony are to kill Flora however Priscilla protests, saying she is supposed to die last. Instead, Ambrose attacks his mother, dragging them both on to the pyre. At that moment, Lee arrives and with Edward Mott's help, the Millers are able to escape in the car. They manage to get to a motel where they are able to clean themselves up and get medical attention for Shelby.