The Horned Woman's history comes to light and the Miller family are helped by friends to rescue Flora. 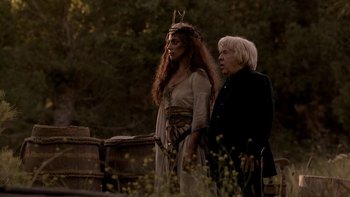 Matt and Shelby argue about Matt's encounter with the Horned Woman; something he has no recollection of as well as his secret deal to leave and burn their house down. Shelby goes to take a bath but is attacked by Piggy Man, who materialises in different areas of the house. Piggy Man chases the couple through the house before being saved by Elias Cunningham. He banishes the Piggy Man's apparition using Croatoan. Shelby asks Elias what Croatoan means and he describes it as a word with dark power. He explains his background; he's been the guardian of the house for many years. Matt wants Elias to leave however, Elias warns him that the Piggy Man will be back.

Elias goes on to show them his historical records of the house's previous tenants. The Chen family had moved in in 1973 and tried to protect themselves with folk magic but The Butcher and the colony slaughtered them. The very first tenant to disappear was Edward Phillipe Mott in 1792. As they continue looking through, Matt notices the two nurses from his vision in the clippings. Elias details how the ghosts told him of the sacrifices the nurses had made at the hands of the Butcher. The history continues with similar happenings occurring around the same time of year; October on the blood moon.

Elias insists that the family leave the house as the cycle starts that night however they still need to find Flora. Elias knows where they can find Priscilla. They encounter the horned woman and Shelby chases her off. Ghosts begin to flock to them and Shelby tries in vain to banish them with Croatoan. Elias tries to plead with Priscilla to release Flora, however he's shot to death with arrows by the colony. The Millers run back to the house where Cricket is waiting for them.

He's angry at them however he can detect that Flora is still alive. He knows that The Butcher is now at her strongest and won't be very willing to negotiate. He leaves and is shaken up when he encounters the horned woman, who's name is revealed to be Scathach. He offers up Matt's sexual favours to her as a negotiation. Scathach transports Cricket back in time to when the Lost Colony of Roanoke first appeared. Ambrose had objected against the sacrifices to the pagan deities and led a rebellion. He claimed that his mother, Thomasin had turned her back on the Christian faith. Having found out, Scathach developed a plan with Thomasin and under the guise of a communion designed to show her repentance, Thomasin poisoned the entire colony. She finally stabbed her son to death, condemning their souls to the land. Now being the last mortal to walk that land, Thomasin offered herself to Scathach who finally killed her.

Cricket tells the Millers of this history when he arrives back at the house. He takes an Uber back to his hotel however the driver's car nearly collides with Flora, who's running across the road.

Hours later, Matt and Shelby are waiting for Cricket's return. Matt decides to leave Shelby behind as she's asleep to investigate whispers from down in the cellar. Scathach is waiting for him there and he's, once again, unable to resist her charms. Scathach is shown to have once been an English woman who had crossed the seas years before. She became an immortal witch, skilled in the practice of Old Magic.