Recap / Adventure Time Short Have You Seen The Muffin Mess 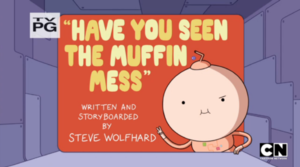