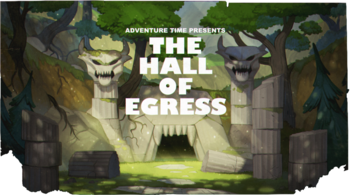 Trapped and alone, Finn must unravel the riddle of the weird cave with no exit.