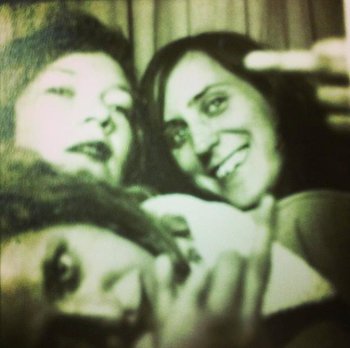 it's a girl!
we are a supergroup duh
— the band's facebook page

Childbirth is a Nouveau-Riot Grrrl Hardcore Punk band from Seattle, Washington, formed in 2013. It is comprised of members Julia Shapiro (guitar/vocals), Bree McKenna (bass/vocals), and Stacy Peck (drums/"cool mom"), all of whom are also members of other popular underground bands.

Their style consists of tight, Three Chords and the Truth-type punk ditties about various common female experiences—from cross-stitching to mansplaining tech bros to, you guessed it, childbirth. Their first-album single, "I Only Fucked You as a Joke", was named by Spin magazine as one of their top 100 songs of 2014.

Not to Be Confused with Birth Tropes (though they tend to employ quite a few of them).