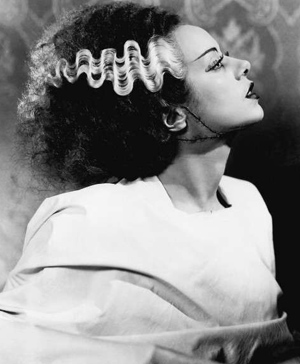 Because you're worth it... and made out of dissected body parts.
"Holy shit! That girl has a skunk on her head!...oh, that's just your hair. Sorry, but that's messed up."
— Agent Kelly, Josie and the Pussycats
Advertisement:

A character has dark hair, with a distinct white or lighter-colored streak running through it.

Often, this is the result of some exposure to magic or other Applied Phlebotinum, or possibly a sign that they're genetically inclined towards awesome. Sometimes, it comes from a scar or other trauma; in these cases, there is overlap with Disease Bleach and Locked into Strangeness. And sometimes, it can just mean they're a rotten person.

In real life, it's a phenotype occasionally associated with a number of unrelated genetic defects. It can also be the result of injury to the scalp. There's a scientific term for this, it's called poliosis

. It's also sometimes a result of the natural aging process.

A subtrope of Multicolored Hair. Actual skunks are, of course, assumed to have this style. See also Duality Motif if the skunk stripe displays two sides of a character's personality.

Has two white streaks in his dark hair.

Has two white streaks in his dark hair.