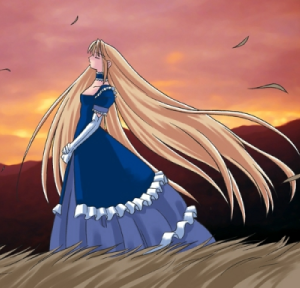 One bottle of shampoo and conditioner per shower. Hope she's got a bulk rate.
"Let it fly in the breeze and get caught in the trees
Give a home to the fleas, in my hair
A home for fleas, a hive for the buzzing bees
A nest for birds, there ain't no words
For the beauty, splendor, the wonder of my hair
Flow it! (Hair!) Show it! (Hair!)
Long as God can grow, my hair!"
— The title song from Hair

This character has long hair — butt to ankle length long hair — and they let it dramatically blow around them. In fiction, this can mean a number of things from accentuating their femininity and/or high social position, to symbolizing their wild and untamed nature. This trope is concerned with the former.

Hair is heavy, especially when wet, and as anyone who has had long hair can attest, it takes forever to comb out note especially difficult if it's longer than your own arm, requires much more shampoo than usual, tangles at the slightest provocation, becomes unpredictably wavy to frizzy in humidity, attacks everything in a strong wind (for that matter, long hair loose in a strong wind can actually hurt, and has a tendency to be blown in front of one's face and render a person effectively blind), and is often getting caught in things and being in the way. It also has a way of winding up in your food and your mouth, eyes, and nose, and if it hangs below your mid-back, you have to be careful sitting in seats to avoid it being pinned behind or under you (or even under other people sitting next to you). Sleeping with very long hair (or sleeping with someone with long hair — in both senses of the term) has its drawbacks, too. For all these reasons, it is associated with those of high status.

A noblewoman, for instance, likely has a Maid Corps that helps her maintain all that hair and the resources to pay for things like gallon jugs of conditioner and one hundred hair ties. This sort of thing is a status symbol. This trope is most often female but a man might also wish to demonstrate that he does not have to do anything strenuous by wearing a second layer of clothing in his hair and beard.

Whether or not this is possible in Real Life (without artificial hair extensions, that is) also strongly depends on one's genetics; every strand of hair has a "terminal length" at which it will stop growing and be shed. Hair's terminal length varies with every individual but is typically around a person's buttock to mid-thigh area, and one must have special inherited genes for their hair to be able to grow past this length without falling out. No matter how hard one tries to grow hair longer than this, if it is not in their genes, it will not be possible.

Compare Improbable Hairstyle and tropes along similar lines. Contrast with Boyish Short Hair, which is mainly used for tomboy types and Action Girls, and Barbarian Longhair for when long hair represents the opposite of refined civility. See Long-Haired Pretty Boy for when long hair accentuates the beauty of a Pretty Boy.

If that much grows very fast, it's Rapid Hair Growth. If their hair is used to cover up nudity and shut up the censors, it's Godiva Hair. Distaff Counterpart of Wizard Beard. See also Compressed Hair for one way to conceal the hair of such length and Hairy Hammerspace for when items are concealed in it.

Note: When listing examples, please mention if they have at least one of the lifestyle or personality characteristics associated with this trope (Girly Bruiser, Lady of War, Lipstick Lesbian, nobility, Ojou, Proper Lady, royalty, Tomboy with a Girly Streak, Yamato Nadeshiko, or other traits). Do not list examples when a character is a Barbarian Longhair.