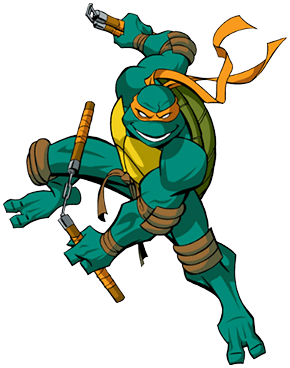 You are a Ninja. What's this? You don't have a Katana? Fine, then you may get the second most popular ninja Weapon of Choice: Nunchaku.

Nunchucks, like the katana, are the Japanese weaponization of the Rule of Cool. All ninjas that don't use swords use chucks and anyone that knows karate knows how to use them. They are even so easy to make that you can just chain two things together and make the Sub-Trope of Instant Chucks. Unfortunately, nunchucks are to katana as Luigi is to Mario: badass on their own but never given the lime light.

The nunchaku are a popular martial arts weapon developed from the rice flail in China, Okinawa, and possibly other places in the Far East, consisting of two hard sticks of wood or metal joined together by a cord or chain. In addition to being used for powerful strikes, the cord can also be used for strangling enemies. A variant of this would be the "three-section staff" (sansetsukon in Japan and san jie gun in China), which is primarily used in Chinese kung fu.

Often wielded by the Bruce Lee Clone, spinning them around his body and looking thoroughly intimidating. As such, in comedic series, expect anyone wielding nunchuks to make lots of Funny Bruce Lee Noises, just before their inevitable failure. Or triumph.

It should also be noted that the real life inspiration for ninja never actually used nunchucks (though there were peasants and farmers among them). Since they were spies more than warriors, when they had to fight someone, they normally had to kill their opponent quickly and effectively, and nunchuks were definitely not up for that kind of job. It was more a weapon used by farmers and peasants to defend themselves from attackers, since they were easy to make, they could be mistaken by farmers' tools at first glance (specifically threshing sticks used to loosen grains from plants), and don't require such a high level of skill to use effectively. Or at least to use without hurting oneself permanently. Furthermore, the purpose of the weapon is not to strike your enemy (common physics decrees that in most situations, the weapon would just smack your own body right back afterward,) but to force them to submit by cutting off circulation to their limbs by using them as a tourniquet. All in all, not a bad Improvised Weapon.

For a greater variety of flail weapons, see Epic Flail. This is a Sub-Trope of Double Weapon, being a weapon composed of joined parts.

This trope is also not about multiple Chuck Norrises, because the universe is only big enough for one Chuck Norris, and he's more than a match for anyone on the planet.

Combined with his lighting powers, Deus is a proficient fighter with his nunchucks.

Combined with his lighting powers, Deus is a proficient fighter with his nunchucks.