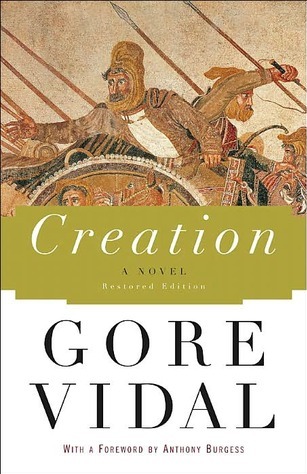 Creation by Gore Vidal manages to combine, impossibly, Historical Fiction and Crossover Cosmology. First published in 1981, it was later re-released in 2002 with some chapters that were originally excised for publication.

The time is the 5th Century B.C. The Achaemenid Empire under the reign of Darius is enjoying a Golden Age. In his interest to expand his spheres of influence and his domains, Darius decides to send Cyrus Spitama, the fictional grandson of Zoroaster, to visit faraway places to establish alliances and trade routes. Cyrus visits India and meets Vardhaman Mahavir and Gautama Buddha, he later visits China and meets Confucius and in the course of the change of fortunes during the military engagements of Persia and the Greek City States, he ends up becoming ambassador to Athens during the age of Pericles.

The purpose of the story as Gore Vidal explained in his introduction was to explain how the idea of creation, of man's relation to the cosmos, and a system of ethics and politics based on the same, developed virtually simultaneously across different cultures in the West and the East. He also noted that it was, in theory, possible for a single person to have met all these major historical and philosophical figures, even if in practice the distance was way too vast to actually make it happen.

Gore Vidal intended the book as a crash course into comparative religion but mostly because he thought it would be awesome to write a book where you could meet Zoroaster, Socrates, Confucius and the Buddha.